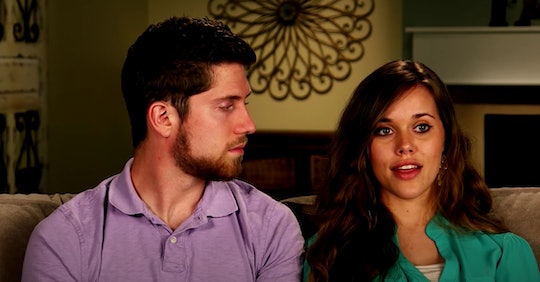 Jessa Duggar Is NOT Pregnant With Baby No. 3, But Does She Want More Kids In The Future?

When you have 18 brothers and sisters, chances are, people are going to have certain expectations about your future family size. And when you're a reality star on a TLC series called Counting On? Well, that pretty much seals the deal: A big family is most definitely in your future. At least when it comes to the Duggars, that's what many fans have assumed. Still, maybe one of Michelle and Jim Bob Duggar's children will opt for the path less-traveled (as far as they're concerned) when it comes to family size. Since more and more of the adult Duggar children have gotten married and announced pregnancies, fans are probably wondering if those who are already parents are planning on adding to their broods. Like, does Jessa Duggar want more kids? All evidence points to the probability that she'll be "counting on" at some point in the future.

In case you happened to miss the drama, rumors that Jessa was pregnant were rampant earlier in March. In fact, In Touch Weekly reported that Jessa was already four months pregnant with baby number three. An unnamed source told the publication that she and husband Ben Seewald “have been keeping the news under wraps, partly because it was in the early stages and also because she did not want to take away from the news that her brother Josiah [Duggar] and Lauren [Swanson] are getting married." But you know how stories involving "unnamed sources" typically pan out. A Duggar family spokesperson told E! News the following day that Jessa was not, in fact, pregnant.

So yeah. I think it's safe to say that Ben, 22, and Jessa, 25, are not expecting a third child — for now, at least. The young couple married back in 2014 and currently, they have two children together — Spurgeon, 2, and Henry, 13 months. Through the years, the Seewalds have been open about their desire for a large family, including their goal of one day adopting. In fact, the couple had talked about adoption even before they got married. "We have many friends who have walked this road, so we have seen firsthand the amazing power of adoption," the then new mom told Us Weekly in May, 2016. "There are so many kids out there who are longing for the love of a family, and we feel strongly about opening our hearts and our home to welcome them in." She continued:

We don’t know what the future holds, but as the Bible says, "Man plans his way, and God directs his steps." So we want to move forward with paperwork and a home study, and just be ready for however God opens those doors.

After they welcomed baby Spurgeon, however, the Seewalds' adoption plans were put on the back burner. In an episode of Counting On, they were told to wait until their son was 9 months old in order to move forward in the adoption process. Except, Jessa announced she was pregnant with baby number two the following August, according to TLC. In February 2017, a very pregnant Jessa reiterated that she and Ben were still open to adoption in the future. “Ben and I still have a deep desire to adopt, and it’s something we continue to look into,” she told People. “We’ve also talked about fostering to adopt.”

According to the publication, the couple has plans for "many future babies" — but they may need to reassess their living situation in the meantime. “We’re already going to have two babies in a two-bedroom house,” Jessa said. “So I’m thinking, we’ll have to upgrade to a three-bedroom.” (Take it from a mom of three kids, guys: Yes, you'll definitely want that third bedroom.)

Whether or not Ben and Jessa are planning on adding to their family in the near future — with a biological child or through adoption — one thing fans can count on is that it'll likely happen again at some point. And I have a feeling we'll all know pretty early on, when the time comes.