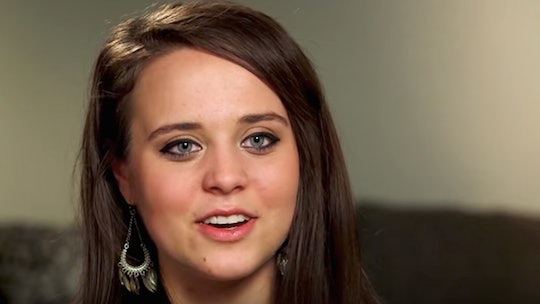 Here's What Jinger Duggar Has Said About Starting A Family

Ever since Jinger Duggar married Jeremy Vuolo in November 2016, fans have been speculating whether they will have children. The questioning recently reached a fever pitch after Jinger's sister, Joy-Anna Duggar, announced her first pregnancy in September. Although it's really no one's business whether or not Jinger Duggar wants kids, fans continue to bring up the topic and some have even wondered if Jinger is taking preventive measures against pregnancy.

If you've been following Counting On, you've probably noticed that the Duggar women tend to conceive shortly after they get married. Joy-Anna announced her first pregnancy just four months after she got hitched to Austin Forsyth in May, and Jill Duggar revealed her first pregnancy two months after she married Derick Dillard. The Duggar family's trend of having babies quickly after marriage makes a lot of sense when you consider the Duggars subscribe to the Quiverfull movement, "a religious movement that adheres to the belief that by having as many children as possible, followers are helping spread the word of God," according to Cosmopolitan.

Given the Duggars' religious beliefs, it's not too surprising that countless fans have wondered why Jinger and her husband haven't announced a pregnancy yet, especially since they're coming up on their one year wedding anniversary. Fans regularly get into debates about Jinger's reproductive choices and her plans for the future on social media — some people believe that Jinger and Jeremy are putting off kids intentionally while others suspect they don't want children at all.

"How come you're not pregnant yet?"

So, does Jinger plan on having kids down the line?

On a recent episode of Counting On, a producer asked Jinger and Jeremy about their five-year plan now that they've settled into married life. Jeremy answered, to which Jinger nodded along in agreement, according to The Inquisitr:

I think we’d love to start a family somewhere in that time period, in the next five years, and see what the Lord does.

And in July, Jinger revealed her desire to have kids during a trip to a thrift store. Jinger said, as she looked at baby shoes, according to In Touch Weekly:

As I look at the little shoes, it’s like, "Oh, these are so cute!" ... I’m thinking, well, whenever — if the Lord would bless us with kids, it would be amazing. Now I know where I can do my shopping.

Of course, no one can truly know what Jinger and Jeremy's plans are — people change their minds on having kids all the time, and this is totally OK. Not to mention this is a private decision (yes, reality stars deserve privacy, too) and it's not cool for fans to constantly bombard Jinger and Jeremy's Instagram accounts with questions about their baby plans.

One fan on Instagram summed up this sentiment perfectly, arguing:

I personally don’t think woman’s reproductive choices should be discussed with everyone and anyone. It’s private - rather you decide to have or not to have children. Wait 3 months after marriage, have them before marriage, wait ten years into marriage, adopt, abort etc. it’s a personal choice - there is not wrong or right way - it’s simply your way.

Even if you're hoping that Jinger and Jeremy have kids sooner or later, it's hard not to see the truth in this statement. Having children is an extremely personal decision, and it's no one's place to speculate about a person's baby plans. It's always best to let a person divulge this information on their own accord — you never know what's going on behind the scenes and you wouldn't want to put a loved one in a potentially uncomfortable position. That being said, if Jinger does have kids in the next five years, that's great. And if not, that's perfectly fine, too.

More Like This
Josh Duggar Sentenced To More Than A Decade In Prison After Child Pornography Conviction
Meghan Markle Made A Sweet Little Tribute To Her Daughter Lilibet
Tan France Reveals The Incredible Care Package Gigi Hadid Sent For Baby Ismail
Ray Liotta Has Died At 67. Not Only Was He An Iconic Actor, He Was A Proud Dad.