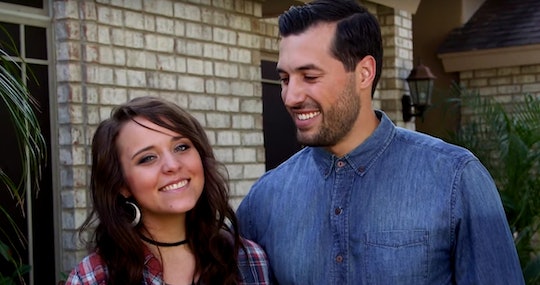 Does Jinger Duggar Work? Here's What We Know About The Mom-To-Be

With just a few weeks left until Jinger Duggar welcomes her first baby into the world, fans are undoubtedly filled with questions: Will her sisters be there for the delivery? What kind of mom will she be? Is she already in labor? There's a lot still unknown, but until baby Vuolo decides to make an appearance, fans can marvel about another part of Jinger's life: her career. Does Jinger Duggar work? Though the Duggars have a rule that states women cannot pursue work outside the home, some of the girls have already broken it.

The short answer is, aside from appearances on her family's shows 19 Kids and Counting and Counting On, Jinger hasn't had a job outside of the house, at least as far as we know. In Touch reported that the Duggar family likely brings home between $25,000-$40,000 per episode, and they've been on TV in some capacity for about 10 years. Though that money is likely split between all 21 of them, it's not nothing. Her husband Jeremy Vuolo has a job as a pastor, according to the couples website, but Jinger's father, Jim Bob Duggar, has actually expressed concerns that Vuolo's salary wouldn't be able to support him and his daughter.

In an episode of Counting On that aired last September, Us Weekly reported that Jim Bob actually told Vuolo to get a second job. "I was just curious about, financially and stuff," he began. "I mean, you might have to have a part-time job, along with the pastor job, to make a go of it." He continued:

Jeremy, being on the kind of modest pastor salary, when you get married, it's going to be a lot tighter, going from being a single guy to being a married guy, whenever that happens — I'm not saying anytime soon. But Jinger loves to go thrift shopping, and it's expensive.

This is not the first time someone has raised questions about the couple's salary or work situation. The next month, Jinger posted a photo to Instagram of Jeremy standing in an empty movie theater. "Apparently the theater is not 'the place to be' on a Monday afternoon... good thing we got here early," she joked. The Hollywood Gossip reported that fans didn't all respond warmly, suggesting that she was out of touch, and that the space was empty because other people had to work.

"People have to work on Mondays, well just because they are at the movies on a Monday during the day don't mean he don't have a real job. Good word people... have fun at the movies Jinger," one fan wrote. Another came to the couple's defense, adding: "This much slack for going to see a movie is pathetic. There’s a reason why movies are shown in the middle of the day as there are plenty of people whose schedules do allow them to watch them during this time."

Regardless, the couple is expecting their first child any day now. In fact, In Touch reported on Tuesday that some believe Jinger is already in labor, based on the fact that her sisters Jana and Jessa already flew down to Dallas. Us reported in April that Jeremy and Jinger announced they were expecting a baby girl, sharing on their website:

We could not be more excited and are eagerly anticipating meeting our little lady this Summer. We especially love thinking forward and realizing that she will have excellent role models in both of her grandmothers, who cannot wait to shower her with love.

But as far as their work situation goes, it's still unclear. It's possible that Jinger or her husband have jobs that the public doesn't know about, or at least money coming in from being on TV. Ultimately, nobody really knows the details of another couple's financial situation, and nor should they. It drives home the point that nobody is really in a place to pass judgment.