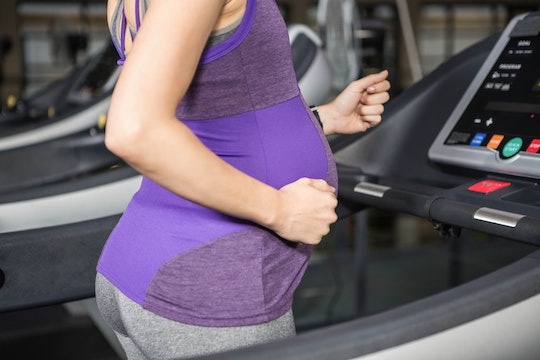 If You're Hoping A Jog Will Induce Labor, Here's What You Need To Know

I'm a runner. One of the best parts of my day is when I lace into my running shoes and hit the pavement. It's like nothing else in the world. I ran throughout my pregnancy with my daughter, and it was a great stress reliever and provided me with time for reflection I wouldn't have otherwise taken. However, there are a lot of old wives' tales out there surrounding childbirth and running, chiefly, that it brings on childbirth. But is that true? Does jogging induce labor or is that just a myth?

Unfortunately for the super pregnant running mothers who are more than fed up with being pregnant, there is no evidence to suggest that running or jogging is an effective means of inducing labor. According to the American College of Obstetrics and Gynecology (ACOG), while exercises including jogging can be quite beneficial to both mother and baby, it simply isn't an effective way to bring on childbirth.

That doesn't mean it's a good idea to take up jogging in your third trimester if you've never run before, though. According to ACOG, you shouldn't be working out to exhaustion, nor should you be picking up an entirely new, vigorous activity during pregnancy. Instead, you should stay with what you were comfortable doing before you got pregnant, and maintain that level of athleticism throughout the pregnancy.

That's not to say there aren't some major benefits to working out while you're pregnant — there are. According to Human Kinetics, exercising while you're pregnant, including jogging, acts like a supercharger for your body during your pregnancy. It helps to keep weight gain in a healthy range, can make labor easier, and can also help settle high levels of anxiety while you're pregnant. Also, it doesn't increase your risk for preterm birth, and lowers your likelihood of developing preeclampsia.

I know that when you're done being pregnant, you're just done. There's nothing more frustrating at 39 or 40 weeks than being told you "just have to wait." I'm a type A personality all the way. I like to be in control. I like to know what's happening, and I like the sense of having some level of agency over what my body is doing. Pregnancy ruins that. Pregnancy often just dumps all over your plans and best intentions. I tried so many things to get my son out, and exercise was chief among them. Have you ever seen a 6-foot tall hugely pregnant woman at spin class? I've been told I was quite the sight. I think I set my bike to "get this baby out." It didn't work. He remained steadfast.

Does jogging induce labor if you're already beginning to dilate and want to move things along? Doula Sherry Streiter wouldn't suggest it, if only for how uncomfortable it would be. She tells Romper, "It would probably feel like a watermelon is hitting your cervix with every step. While it may do something to bring on labor, theoretically, you'll probably only make yourself miserable doing it." It's like she read my mind of what it felt like to run while pregnant with my daughter towards the end. It does feel like a watermelon is bouncing atop your cervix and shoving it down into your vagina with the force of a jackhammer. It's completely not fun and really ruins running for a while.

The only natural method proven to bring on labor is prolonged, intense, nipple stimulation, according to Social Science and Medicine. It takes a lot of effort, and a lot of time, and even then, it doesn't always work. The baby does what it wants, and comes when it thinks it should. There's simply no avoiding that fact, and you can't run away from it either. (Or run towards it apparently.)