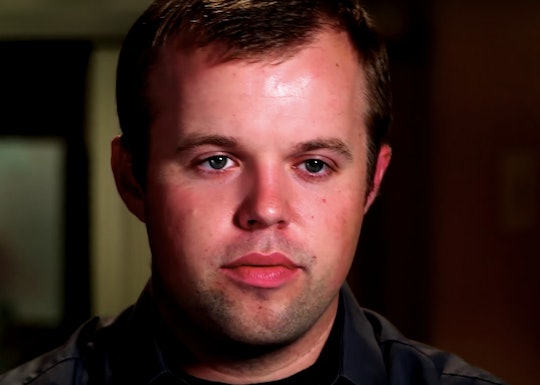 Does John-David Duggar Have Social Media? The Family Rule Says He Can't Just Yet

Fans of the Duggar family will know that as the clan counts on (ha, not sorry) and the older kids start building families of their own, there's tons to keep up with, and it's never been easier to do than by following them online. However, one of the Duggar family rules is that you are forbidden to have a personal Instagram, Twitter, or Facebook accounts until you are engaged. Most of the kids have followed suit, but not everyone. It begs the question: Does John-David Duggar have social media? As his younger siblings get married and start sharing their lives online, it leaves fans wondering whether John-David will be making an exception.

Though John-David does not have any public or verified profiles on social media yet, his younger brother Josiah does, despite the fact that he did not get engaged until three years after he started his Instagram account. That's a pretty significant breech of the family rules, especially when you consider that the girls are expected to abide by them (and thus far, have). But given the fact that Josiah has already done it, it might be possible that John-David is next, or that he already does run private accounts for himself and his friends.

Social media accounts for singletons are just one of the many normal things Duggar kids aren't allowed to do. The family has also been open about restricting everything from TV time to how their dates are chaperoned (they can't court alone, it turns out). Thus far, everyone except Josiah has stuck to the rules on the whole social media thing, with siblings Jill, Jessa, Jinger, Joy-Anna, Josh, and Joseph all following suit.

Because not everyone in the family has accounts of their own yet, it's common for fans to fall for fake ones, or even fan accounts posing as the actual person themselves. In February 2015, the family had to announce which Instagram accounts were real, Inquisitr reported, in order to ward off people from following the wrong ones. Most recently, fans have been expressing curiosities over whether the siblings have Snapchat accounts, with some speculating that Jinger does.

In their book, Growing Up Duggar, the siblings even addressed how they feel about social media, saying that though it is important to communicate with others, they are cautious about how they use it:

We realize that social networking can sometimes become an avenue to begin communicating with people we normally would not be in touch with. But we should always be aware of our actions in this regard. Personally, we are very careful not to text, email, or communicate over the Internet with guys on a personal, intimate level. Instead it is wise to keep these interactions businesslike.

If it is the case that he's just following the family rules, we may not have much longer to wait until John-David does get his own accounts. Just days ago it was reported that he had began courting someone new, after years of making jokes about being single. (He told People in 2014 that he's definitely "an expert in love and marriage" and made guests at Ben and Jessa's wedding reception laugh when he said he was open to receiving marriage applications... and then did actually get some.)

"I think one day, if the Lord will bring the right one along, I will start a family and hopefully be able to invest in their lives and raise a generation that will be great people for society... a good, solid family," John-David said about his future plans in an interview with TLC, noting that he was praying about it. You know what they say: first comes love, then comes marriage, then comes another Duggar finally on Instagram.