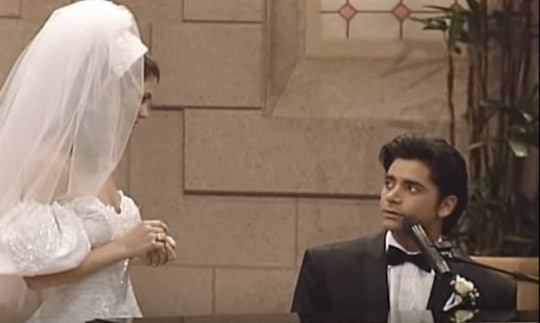 If you have finished the first episode of Fuller House on Netflix, you can officially die happy. At a party at the Tanner household, they make Uncle Jesse, aka John Stamos, actually sing "Forever" and it's pretty much everything about Full House wrapped up into two delicious minutes. It's like when you see a couple fighting on line at Bed, Bath, and Beyond — you just can't look away but you know you shouldn't be listening.

In case you don't recall, "Forever" is a Beach Boys song that Uncle Jesse covered with his band Jesse and The Rippers. He sang it to Becky on their wedding day in one of the cheesiest moments of television history. If Uncle Jesse crooning —and making Rebecca cry in her wedding dress — wasn't everything you believed about true love in the '90s, we just cannot be friends. Seriously.

Here's the thing though: it doesn't look like John Stamos actually ever really sings the song. Sure, he's toured with the Beach Boys and played with classic rock legend John Fogerty, but always on drums. Stamos is a percussion man. He's done some Broadway stints, so he obviously has the pipes, but when it comes to "Forever" he's the lip-synching master. Check out this reunion of Jesse and The Rippers on Jimmy Fallon. He's not even trying to hide the fact that he's not singing.

But the point of Uncle Jesse and "Forever" is about so much more than whether he's actually singing. I mean, this is a show about extended family living together, hugging, and never even threatening to strangle each other in the kitchen. I don't know where you come from, but even on our best days, my family throws a solid eye roll or two into the mix. Nothing is really real on Full House. This is why it's so lovely.

In the reboot, it looks like Jesse is lip synching again. It's one of those moments, when the whole family and the Rippers join in that make you a little embarrassed you actually know the words. You didn't even know you've been waiting to hear this song since 1992. And who cares about the vocals? I had all eyes on Stephanie, who joins the sing-a-long by busting out a tambourine and using it. You can't make this stuff up.

I must say though, for the true Full House aficionado, the 1992 wedding version is so much better. It's not just the single, solo tear running down Becky's face. It's the fact that no one was expecting it. He stops an entire wedding ceremony just to sit down at the piano and get at it. Uncle Jesse even prepped the church choir to join in, in case you don't recall. Talk about romance.

Then again, there's the music video that Jesse and The Rippers make that got "big in Japan," as Stephanie jokes in Fuller House. This is some video, too. If aliens descended upon our planet and found this music video, they would know everything about us, the nineties, even America. There are candles, bongo drums, and unbuttoned flannel shirts. At one point, John Stamos is holding a naked baby and singing to it. What more can you ask for?

It makes choosing a favorite version a pretty tough call, whether or not Stamos is singing. In my humble opinion, there's just not enough heart in the Fuller House version. But that's probably because even Uncle Jesse knows that some things are better left in the past.