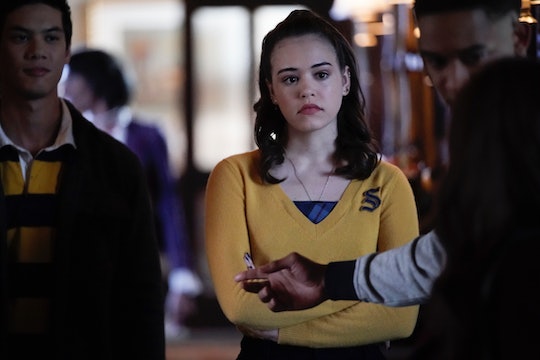 Josie Took A Bullet For Lizzie On 'Legacies'

After a thrilling first season, Legacies left fans with an equally intense and exciting season finale. Armed Triad agents made their way into the Salvatore School, and initiated a deadly stand-off with the students, including the Saltzman twins. In the midst of the warfare, Josie gets shot by a magical bullet that starts slowly killing her. But does Josie die on Legacies?

Luckily, Hope swoops in to save Josie’s life, so she is able to recover from her wounds. But as a fan, it was hard to grasp that Josie was so close to death in the first place. The Triad agents managed to block the students’ magic, so Lizzie and Josie were unable to use their witch powers to defend themselves. When they are confronted with a Triad agent who shoots at them, both sisters jump in front of the bullet to save each other, but Josie ends up taking the bullet. While seeing her get shot was heartbreaking, it was a relief to see that despite their issues, the Saltzman twins still have each other’s back.

In an interview with TV Line, Legacies showrunner Julie Plec said that bickering aside, Josie and Lizzie would do anything for each other, and they proved that in the season finale. She explained that it was a question of which twin was “willing to give herself up for the other, more so than which twin would defeat the other,” adding that down the road, their relationship will become about “sacrifice more so than victory.”

If you’re wondering why Josie’s condition deteriorated so quickly, it was because she wasn’t shot by just any ordinary bullet. The Triad agents were using bullets made of Malivore mud — which has a similar effect as a werewolf bite — that began killing Josie as it spread. In The Vampire Diaries and The Originals universe, when a werewolf bites a vampire, the venom spreads, eventually driving the victim mad before it kills them from the inside. The only cure for a werewolf bite in the TVD universe is the blood of Hope’s father, Klaus Mikaelson, the original hybrid (werewolf and vampire).

Hope’s blood can also cure a werewolf bite, but because she is a tribrid (werewolf, witch, and vampire) her blood was able to cure Josie of the Malivore toxin. The exact science wasn’t explained, but it probably has to do with the fact that Malivore was created and secured by a triad of supernaturals — witches, vampires, and werewolves — and because Hope is all three, her blood could neutralize its magic.

But with Hope gone and out of everyone’s memory, the Salvatore Students may have a dangerous road ahead. Triad is using Malivore mud as weapon against supernaturals, and with Klaus dead, and Hope out of the picture, if anyone is shot with a Malivore bullet, there is no cure that could save them. It’s unclear how or when Hope will return for Season 2, but until she does, it looks like her friends are on their own. Hopefully, Josie and Lizzie will continue to look out for each other, because together, they may be able to combat any supernatural threat that comes their way.