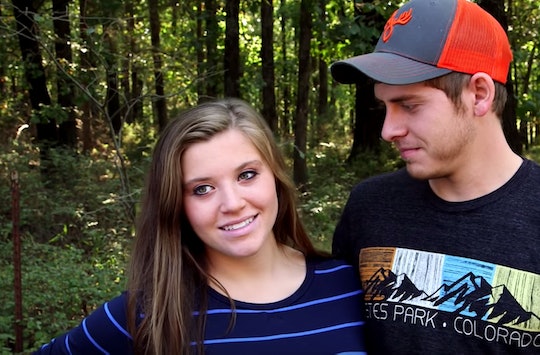 In case you missed the memo — or just haven't kept up with them on social media — the Duggar family seems to be in the midst of a baby boom. (At one point, there were six Duggar women all expecting at the same time!) Well, one of them (Jessa) has given birth, and there are still five more pregnant Duggars to go. Among them is Joy-Anna, who is expecting her second child with husband Austin Forsyth. And Counting On fans might be wondering: Does Joy-Anna Duggar work?

If you've followed Michelle, Jim Bob, and their 19 children since their 17 Kids & Counting days, then you probably know the Duggars have extremely conservative values that tend to follow strict gender roles. Because of this, the women stay home and raise children while the men are the primary breadwinners of the family. In fact, none of the Duggar women are employed full-time outside of the home, according to Cheat Sheet. It's worth noting that Jinger Vuolo has dabbled in photography, Jill Dillard did earn a certificate for midwifery, and although Abbie (John David's wife) worked as a nurse while they were courting, she quit her job once the couple was married and moved to Arkansas.

But does the same ring true for Joy-Anna?

In 2017, Austin Forysth asked Duggar patriarch Jim Bob permission to enter into a courtship with Joy-Anna. That's when viewers learned Forsyth has a bulldozer business and is a house-flipper.

During their subsequent courtship, Counting On fans got to see Joy helping Austin with home renovations for a potential flip. "House projects are really good for couples to do together," Joy-Anna said. "Finding how he works under stress." She went on to admit, "Austin and I can distract each other from work when we're tying to get a project done, but ..."

"We still get a lot of work done," Austin added.

Shortly after the Joy-Anna and Austin tied the knot, they were filmed fixing up a house they would later sell. And from the looks of this TLC clip, the renovations took a bit longer than they had anticipated.

Since then, Joy-Anna has regularly posted on Instagram about helping with home renovations on Instagram. "I love getting to tile... especially with these cuties!😍😘💪🏼," she wrote in January.

Oh, and did I mention that Austin's parents, Terry and Roxanne Forsyth, own the controversial Fort Rock Family Camp? Joy-Anna is apparently listed as a "staff member," according to In Touch Weekly. So there's that.

And of course, while Austin takes on the bulk of the work, Joy-Anna isn't exactly lounging around eating bon-bons. That's because she's busy caring for their 1-year-old son, Gideon. Not to mention, she's expecting their second child as well, according to People.

When it comes down to it, Joy-Anna seems to be following in the footsteps of the Duggar women before her. Meaning, she is is a stay-at-home mom who helps out with her husband's career/her in-laws' family business. (I'm sure the paycheck she receives from TLC's Counting On helps, too.) So although she's clearly a busy mama and wife, it doesn't appear Joy-Anna is employed outside of the home. But that doesn't mean she's not working hard to support her family.

More Like This
Reese Witherspoon’s Son Deacon Is Officially An Actor & Is Working With One Of His Mom's Besties
Drake Shared A Photo Of His New Face Tattoo & It's A Sweet Tribute To His Mom
Anne Heche Remembered As "Loving Mother" To Her Two Sons After Her Death At 53
Dan Levy Just Proved He's The Ultimate Uncle With This Perfect, Sweet Answer