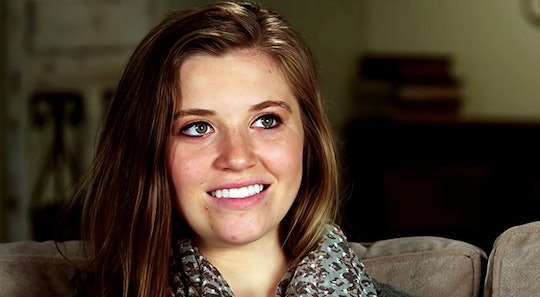 Out of all the Duggar siblings, Joy-Anna is arguably the busiest one these days. Not only is Joy-Anna preoccupied with her almost 1-year-old son, Gideon, but she also helps her husband, Austin Forsyth, with construction projects. But does Joy-Anna have a traditional job? It looks like the Counting On star has beefed up her resume.

Before a potential suitor proposes marriage to one of Jim Bob and Michelle Duggar's daughters, they have to prove employment. It's an arguably sexist tradition, to put it mildly, but Jim Bob continues to uphold it year after year.

When Austin stepped on to the scene around November 2016, he showed off his family construction business to Joy-Anna's dad. He even invited Jim Bob over to see his fifth house project, the property he needed to complete to propose marriage. "About ready to have it on the market," he told Jim Bob in a Counting On clip.

Since flipping houses is Austin's bread and butter, it's really no surprise Joy-Anna helps him out with this effort. Last week, for instance, Joy-Anna took to Instagram Stories to reveal that "about six months ago" the couple sold their house and moved on to new projects. Joy-Anna then unveiled a completely new home that she "helped" Austin design, according to the video uploaded to Reddit.

Although Joy-Anna is clearly busy helping Austin with remodeling, it appears she has some extra time to work as a staff member at Fort Rock Family Camp. The camp is owned by Austin's dad, Terry Forsyth, and it has been in operation since the last 90s.

Joy-Anna revealed this tidbit via a promotional video for the camp, in which she and Austin are credited as "staff members." The pair has promoted the camp before, but this is possibly the first time they referred to themselves as staffers.

Austin’s family runs an amazing Family Camp where people can just go, get away from the business of life to rest, and spend quality time together doing all kinds of activities! We love getting to be apart of it and getting to meet tons of new families!! Hope to see y’all there this year!!

It's not exactly clear, however, what Joy-Anna actually does. Is she the camp's chef? Does she operate the property's advertised zip lines? Is she leading camp sing-alongs? So many questions.

If I had to guess, I'd wager that Austin and Joy are booked for speaking engagements. The camp often hosts marriage retreats and other conferences, so I wouldn't be surprised if Joy's staff position entails appearing at these aforementioned events.

It's possible Joy-Anna will open up more about her work and life in the couple's new YouTube channel, "Following the Forsyths," an endeavor she launched Sunday.

Some people are excited about the new channel, with one person commenting on the parents' Instagram account: "Love it!! Are y’all gonna start vlogging?"

Another fan chimed in: "I love seeing your family’s vlogs!!!! TLC isn’t enough."

It looks like these fans are in luck because Joy-Anna (or Austin) revealed that they plan to continue vlogging. "Yeah!! Were gonna do it a little!!" they replied.

If Joy-Anna doesn't address her job via vlogging, it's possible viewers will get more details when Counting On returns to TLC on Feb. 11. Stay tuned.