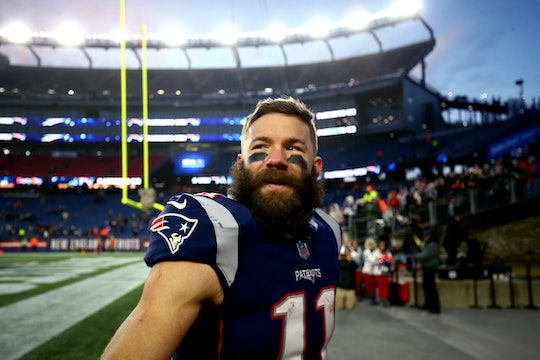 Does Julian Edelman Have Kids? His Daughter Is His #1 Fan

With the New England Patriots once again heading to the Super Bowl, quarterback dad-of-three Tom Brady is usually the athlete we think of when it comes to players who make the game a family affair. But he's not the only one looking to make his kids proud. Wondering if Patriots wide receiver Julian Edelman has any kids? The 32-year-old may not have a Brazilian supermodel cheering him on from the sidelines like Brady does, but he *does* have a daughter. And while she may still be a bit too young to appreciate her dad's impressive skills on the field, it seems safe to say she's likely his most important fan.

Though he's currently said to be single, Edelman has previously been linked to supermodel Adriana Lima, and Swedish model Ella Rose, according to Heavy. And though neither turned out to be a long-term love connection, his off-and-on relationship with Rose actually resulted in the couple's 2-year-old daughter, Lily. The news of Rose's pregnancy didn't initially quite seem to go over all that well with the athlete — according to The Daily Mail, Edelman didn't publicly acknowledge that Lily was his daughter until after Rose filed a paternity suit in 2016 — but these days, it seems clear that she's an important part of his life.

Though Rose and Edelman were no longer an item by the time Lily arrived, The Boston Globe reported in Dec. 2016 that Edelman flew out to meet his daughter when Rose gave birth in Los Angeles. And though the fact that Rose had to file a paternity suit against him during her pregnancy might suggest that the one-time couple may not have exactly been on good terms, it sounds like they were able to bury the hatchet: according to TMZ, Edelman was by Rose's side during the birth, and that while they never attempted to rekindle their romance, they made sure to commit to co-parenting.

Despite the distance between then (Edelman is in Massachusetts, while Rose has remained in Los Angeles), Lily seems to be the number one lady in Edelman's life these days — and from time to time, she even pops up on her dad's Instagram account. In August, for example, Edelman shared some seriously sweet photos of Lily visiting him during practice after he'd returned to football following an ACL injury, according to Pats Fans, and in October, he took to Instagram to share a photo of the two of them going apple picking.

Of course, Lily also makes the occasional appearance on her mom's Instagram as well. As a popular Instagram model with over 780,000 followers, Rose often shares glimpses from her daily life, during which she somehow manages to look inexplicably gorgeous at all times. But in December, she shared a series of pics from Lily's second birthday party at home in L.A., and while it's not clear if Edelman was there for the celebration, it definitely looks like Lily had lovely day (complete with an impressive spread of pink-and-gold-themed treats).

A month earlier, in November, Rose also shared a sweet tribute to her little girl, and reflected on how fast she'd grown. Rose wrote,

I can’t believe my little angel is turning 2 years in a couple weeks ... To all the moms and dads, do you ever look at your children and wonder where time went? Appreciate the time because it goes by so fast and in the end the time and the memories that we have together is all that matters.

Another detail that isn't quite clear? Whether Lily will be there to cheer her dad on at the Super Bowl on Sunday. Either way though, it seems pretty safe to assume she'll be on his mind — and that she and Edelman will have a pretty great reason to celebrate if the Patriots end up winning.