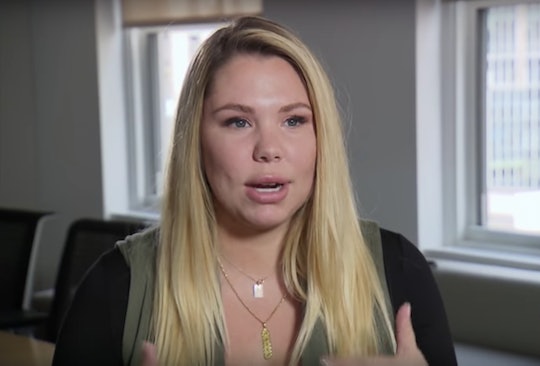 Even before you have children, thinking about how many little ones you might want to have one day, or any at all, is often complex and is rarely something you can totally predict. And one reality TV star certainly understands this conundrum. Recently, Teen Mom 2 star Kailyn Lowry revealed she does want more kids one day and she may explore alternative methods to grow her family.

As many fans of Lowry know, the mom of three co-hosts a podcast, called Coffee Convos, along with Lindsie Chrisley from the hit USA reality show, Chrisley Knows Best. Lowry is obviously used to opening up in front of people, as she's been on more than one reality television show, but on her podcast, she reveals even more about herself. Recently, Lowry even had her ex-husband, Javi Marroquin, on the show, and things definitely got intense.

Now, the 26-year-old has revealed that haters aside and although she doesn't have a concrete plan in place right now, she still wants another baby. "I want more kids," she said on her latest podcast, released on March 22, according to In Touch Weekly.

In the latest episode, Lowry and Chrisley interviewed Mackenzie McKee, who will be joining the cast of Teen Mom OG in the upcoming season, or is rumored to at the moment, according to E! News. And during the episode, Lowry spoke about how she was jealous of McKee's family because her three children are all about two years apart in age, and Lowry's have a few more years in between them. She elaborated on her wish to have another fourth baby, according to In Touch Weekly:

It's crazy because you're like, Kail you have three kids by three people why the hell would you want more kids but I don't know I just feel like I want one more.

Lowry acknowledged that she has the option to use alternative methods to expand her family if she wishes to. According to Hollywood Life, "in addition to researching sperm banks, she is also interested in freezing her eggs."

Looking at McKee's family, Lowry revealed that she loved how guest star's three children, 7-year-old son Gannon, 4-year-old daughter Jaxie, and 1-year-old son Broncs, were spaced out. She said, according to In Touch Weekly:

I feel like two years is more — it kind of makes more sense for them to be best friends, but Isaac and Lincoln are best friends. I don't know though, I just feel like, if I had another one that was close in age with Lux, they could be buddies but it's also insane of me to think that way.

Lowry certainly has a lot going on in her life at the moment, so considering a sperm donor or freezing her eggs gives her even more control of this decision right now and more time to think about it.

Additionally, she has recently also opened up about her sexuality, telling co-host Chrisley that she had a girlfriend on their podcast back in November 2017, according to People. Explaining their relationship, Lowry said that it was just a natural development, according to People,

We were friends for a year and so it kind of just turned into [a romantic relationship]. So, it’s not like she was trying to wine and dine me to ask me to be her girlfriend, you know what I mean? It more or less just happened.

Whatever Lowry decides is sure to be what's best for her and her children, because that's just what moms do. Whether she freezes her eggs, uses a sperm donor, or some else else entirely, hopefully she keep fans in the loop if she decides to grow her brood one day.