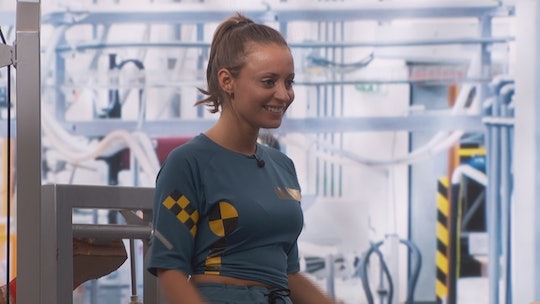 This week of Big Brother was probably the wildest yet, which is saying something since this season has been full of surprises. However, after Sam nominated Kaitlyn and Haleigh, Faysal won the Power of Veto, and then used it to save Haleigh. Kaitlyn and Rockstar were left on the block on Thursday night. Then in an almost unanimous vote, Kaitlyn was sent out the door. But in another twist, Sam's power finally came into play and Kaitlyn gets a chance to come back. So will Kaitlyn come back to the Big Brother house or is this the end of her game?

In case you've forgotten, during the first week of this season Sam was given a Power App from America. Although most of America is now regretting this choice now that Sam is no longer a robot and revealed her real feelings about the women in the house. Regardless, the power gave Sam the ability to give herself or someone else who was evicted the chance to return to the house. If she didn't use the power in the first three weeks of the game, the chance was then automatically offered to the fourth person evicted, who was Kaitlyn. Thus, it was up to Kaitlyn whether or not she would return into the house. Unfortunately, she was unable to save herself.

Although Kaitlyn has won a head-of-household competition, that was mostly based on chance. Thus, Kaitlyn hadn't exactly proven herself to be a great competitor so the odds of her doing well in this challenge weren't that great. Still, when you're given only one chance to continue competing for $500,000 and you're also out for revenge, it could suddenly motivate you to do whatever it takes to get back in the house.

After going upstairs, Kaitlyn discovered a puzzle of herself that she had to deconstruct and then put back together on the other side of a see-through wall. Kaitlyn was given two minutes and 30 seconds to complete the puzzle, and though it looked like she almost had when she put it all together on the floor, she couldn't stand it up in time. Thus, she was sent right back down the stairs and out the door to meet Julie.

Unfortunately, the episode was already running long so there was no time for Julie to have her full conversation with Kaitlyn live on air. However, Julie did reveal to Kaitlyn that she was evicted with a 9-1 vote. Kaitlyn attempted to guess who was the one person who didn't vote her out, throwing out Tyler and Fessy's names. However, she was surprised to discover that it was actually JC who voted keep her. Honestly, most of America was pretty shocked too, especially since earlier on in the episode he was the one campaigning against Kaitlyn. JC even said in his diary room video that he felt they had to get Kaitlyn out this week while they had the chance. This begs the question why did he flip?

The best guess is that JC purposefully campaigned against Kaitlyn and then flipped the vote so he could then pin the flip vote on someone else later. Most likely he'll try to pin it on Tyler or Fessy since they were the closest to Kaitlyn, though one has to wonder why JC would do that. He's in a very comfortable position in the house right now. No one's targeting him and up to this point he's always voted with the majority of the house. So why make this move now? It's hard to say. Hopefully, viewers will get more answers during Sunday night's episode.