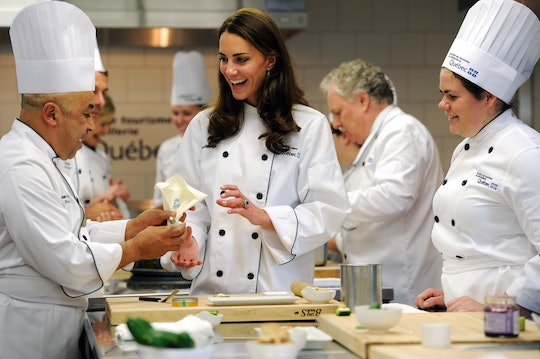 Does Kate Middleton Cook? The Duchess' Culinary Preferences Might Surprise You

Kate Middleton’s undeniable grace, enviable figure, and lavish lifestyle have impressed many fans and admirers worldwide. The Duchess of Cambridge lives in front of the cameras as she attends official engagements, meets with important people as a part of the royal family, and greets her countless fans. But there is much of the duchess’ life that fans don’t see on a daily basis (like the more mundane aspects of daily life), and it may have left some wondering: does Kate Middleton cook?

The Duchess of Cambridge is, in fact, a home cook, according to Life & Style. She indulges in the hobby during evenings, according to Vanity Fair, and, at least at the beginning of their marriage, often made homemade fruit jams and Prince William’s favorite supper — roast chicken.Vanity Fair noted that the royal couple that everyone adores may even have their own sausage-maker.

"You have to remember that she’s not royal. She comes from a normal background and a normal home where she’s always cooked for herself," former Kensington Palace chef Carolyn Robb told Racked. "And what I’ve always heard is that William enjoys spending time with her family because they just eat together at the kitchen table like a normal family. I’m sure that that’s what they still do."

The couple reportedly doesn’t even employ a chef in their home, though that may have changed now that the couple has three children. "They have a small household and can fend for themselves," Robb told Racked. Kate’s culinary creations reportedly range from spicy vegetable curry to homemade pizza, according to Life & Style.

Middleton apparently also has many family recipes hidden under her royal belt. In fact, one of Middleton's first-ever gifts to Queen Elizabeth II was a jar of her homemade chutney, which she gifted on her first Christmas at Sandringham, according to Delish. "I was slightly worried about it, but I noticed the next day that it was on the table," Middleton said, per Delish.

One of her favorite things to cook, according to the Mirror, is curries, as she said on the couple's tour of Canada in 2016.

Despite living a lavish lifestyle, Kate doesn’t spoil herself with all kinds of foods. In fact, according to Delish, the duchess has followed a strict diet in the past, which she used to slim down before her wedding day. Lean proteins, vegetables, fruits, and whole wheat bread are a part of The Dukan Diet — a high-protein, low-carb program — which she reportedly used prior to her wedding.

The duchess has also tried a raw foods diet to keep the royal couple healthy. According to The Daily Mail, Middleton has tried to stick to only raw foods one day a week, though it's unclear if that's a routine she still follows. During pregnancy, the duchess reportedly turned to a diet that included avocados, berries, and oatmeal to help soothe her severe nausea (she has had hyperemesis gravidarum during each of her pregnancies) and gain the weight needed during pregnancy, according to Self.

The duchess reportedly doesn’t mind indulging in sweets from time to time, according to Delish. As a mother of three, avoiding cakes and candies must not always be possible, of course.

While Middleton's cooking habits might be surprising to some, given her royal status, the Duchess of Cambridge is clearly a pretty talented — and busy — mama.