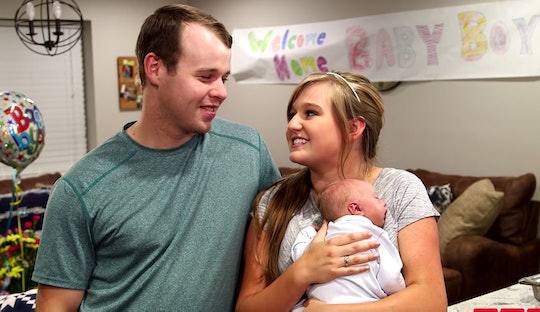 It's probably safe to say that most Americans have at least heard of Michelle and Jim Bob Duggar, and their 19 children — even if they've never watched a second of their reality TV shows. Because having 19 kids is simply unimaginable to most people. But as it turns out, many of the adult Duggars' spouses also come from large families, athough not quite as large. Considering Joseph Duggar and his wife Kendra are about to welcome their second child, plenty of Counting On fans have probably wondered: Does Kendra Duggar have siblings?

Although Counting On doesn't often feature the families of those who marry into the Duggar clan, viewers do get a glimpse of their familial background toward the beginning of a relationship. Fans were first introduced to Kendra Caldwell in March 2017 when news of her courtship with Joseph was officially announced. In a TLC video clip, Joseph explained that he first met Kendra at the church where her father, Paul Caldwell, is a pastor.

From just a glance at Kendra's parents, it's obvious Paula and Christina Caldwell, are relatively young compared to Michelle and Jim Bob Duggar. (Kendra's parents are in their late 30s/early 40s, In Touch Weekly reported.) And so far, the Caldwells have eight children — Kendra, Lauren, Micah, Nathan, Timothy, Olivia, Jesiah, and Isaiah — according to the church's website. So it makes sense that their youngest child and Kendra's oldest child might be close in age. However, the Counting On star recently shared just how close in age Isaiah and Garrett really are.

Kendra confirmed in her TLC special for Garrett's birth, which aired in June 2018, that her parents were expecting their eighth child. "We found that my mom was expecting about a month ago," Kendra explained as she took breathing lessons from her experienced mom. "I think this has definitely been really interesting because we've been able to share a lot of things that we didn't get to share before so I feel like we've become even more like friends. And I guess our relationship has gone more to a different level."

In early October, Kendra posted a 35-week pregnancy update with baby number two via Instagram. And in doing so, she shared photos of her 16-month-old son, Garrett, and her youngest brother, Isaiah — who look like they could practically be twins. "Spending time with family is the best," the expectant mom captioned a series of vacation shots. "Fun fact: Garrett is 5 months older than his uncle Isaiah." (If you scroll over a few times, you'll see how similar the blond-headed boys look.)

Back in August, Kendra shared photos of Garrett and Isaiah hanging out in a stroller together. She captioned the carousel of snaps with, "Garrett and Isaiah are cute little stroller buddy’s!!! @thecaldwellfamily#walkinthepark#unclenephewtime."

Seriously though, how cute are these little guys? The familial resemblance is definitely strong. And although they're technically nephew and uncle, I have a feeling Garrett and Isaiah will grow up having more of a cousin relationship because they're so close in age.