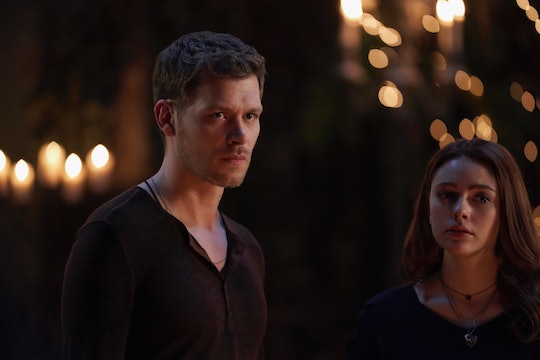 Fans Worry Klaus Will Not Survive 'The Originals' Series Finale

The penultimate episode of The Originals ended with Klaus about to end his life with the white oak stake. Now, going into the finale, fans have to ask is Klaus going to die in the series finale of The Originals? The odds, unfortunately, are definitely not in his favor.

The events leading to Klaus' possible demise started back in Season 4 when The Hollow took over Hope the first time. Back then, the Mikaelson siblings decided to take a fourth of the Hollow into themselves and then separate from each other so the Hollow could never come together again. Of course, this is the family who's slogan is "Always and Forever," and they couldn't possibly stay away from each other for that long. Fast forward to Season 5 and the world was literally going to hell because the Mikaelson's just couldn't stay away from each other and Hope. More importantly, Hope was tired of not being able to be with her father, especially after her mother died.

Thus, Hope took things into her own hands, and returned the Hollow back to her body, but it turned into a sickness that would ultimately kill her once she turned into a werewolf for the the first time. To save her, Klaus enlisted the help of Caroline and her daughters, who took the power from Hope and put it into Klaus, without Hope knowing. And that's pretty much where the show left off going into the finale.

Elijah arrived just as Klaus was going to stab himself with the stake, but something has to happen to stop Klaus from going through it. In fact, in a preview for the finale, executive producer and creator of the series Julie Plec confirmed that Klaus will not die...at least not right at the beginning of the episode. Instead, something or someone will prevent it from happening, but that doesn't mean Klaus will survive until the end of the series.

Klaus did take the Hollow inside of him and just as it was killing Hope, it probably won't be good for Klaus either. Even though he's immortal and obviously has much more stamina than Hope, who is a young witch/werewolf, the Hollow has proven time and time again how strong it is. Can Klaus really find some way to live with it or destroy it once and for all? Can his family?

That's hard to say, but one thing's for sure. Once the rest of the Mikaelsons find out what Klaus did and what he planned to do they're not going to just stand by and let him end his own life. They're going to do everything they possibly can to save Klaus. However, if Klaus has his way they won't be able to stop him from piercing the white oak stake through his heart to save them from himself and the Hollow. And though fans certainly don't want to see Klaus go out like this, his sacrifice would be a pretty understandable end to the series.

Since The Originals began it has been a show about family and the lengths to which this family will go to protect their own, despite their own infighting. Though the dynamics of the family were always changing (their parents came and went, Freya rejoined the family after most of her siblings didn't know she existed, etc.) their motto, "Always and Forever," has held true, for the most part. The Mikaelsons will go to the ends of the Earth and back again to save each other, but Klaus has certainly gotten away with a lot more than his siblings. He's staked them and put them away in coffins when he didn't want to deal with them anymore, and on numerous occasions he killed or ran off his siblings' loved ones.

If Klaus actually dies as a sacrifice for Hope, and everyone else around him who would be affected if the Hollow overpowered him, it will be the final good thing he does for his family after all they've gone through for him. Though it may be a sad end, it'd also be a satisfying one.