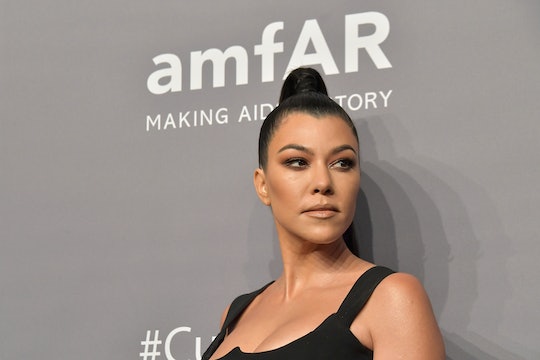 Everything We Know About Whether Kourtney Kardashian Has A Nanny

Celebrity parents are no strangers to helping hands. It's not uncommon for famous parents, like many who have the financial means, to have nannies and other helpers to manage their busy work schedules and mom-life, but some prefer to be totally hands-on with their kids. One Keeping Up With The Kardashians star, for instance, has always seemed pretty involved when it comes to parenting, but does Kourtney Kardashian have a nanny to help with her three kiddos?

More Like This
JAY-Z Had A Great Response To How He'd Feel If His Kids Don't Follow In His Footsteps
Kim Kardashian’s Garage Is Full Of Mini Ferraris & Other Tiny Luxury Cars For Her Kids
Exclusive: Teen Artist Tyler Gordon Reveals The “Ultimate Hero” He Wants To Paint
Halle Berry Shared A Beautiful Throwback Pregnancy Photo On Mother’s Day

While Kardashian makes a strong effort to be heavily involved with her kids, she's reportedly had help along the way, like many celebs do. According to BabyGaga, the 40-year-old has had a nanny, or a team of nannies, to help with her little ones: 9-year-old son Mason, 6-year-old daughter Penelope, and 4-year-old son Reign.

When Kardashian had just one child, her eldest son Mason, she reportedly had a nanny, according to Parents, but preferred to look to her family members for babysitting duties. As Parents reported, Kardashian apparently often looked to Caitlyn Jenner during that time and the former Olympian reportedly spent many days during Mason's youth taking him to the car wash, among other places.

In fact, Kardashian possibly opened up about having help in an 2014 issue of Fit Pregnancy, when she was ready to go back to work. She told the magazine that unlike her sisters, who had nannies help them in the beginning when their kids were newborns, she opted to do things on her own during the early days. However, after a few months of baby-related solitude, it sounds like she may not be not totally against having others come in and lend a hand — and she shouldn't.

"I love doing everything myself at the beginning," she told Fit Pregnancy. "I'm not getting a baby nurse. I take two months off and no one is allowed to bother my or talk to me about anything work-related — of maybe three months this time."

Help, in Kardashian's situation, may be enlisting her family members or those close to her, as Parents previously reported.

Kardashian's sisters have opened about their use of nannies. Recently, Khloe Kardashian came under fire for taking her nanny along with her just about everywhere, as People reported, and she was quick to hit back at her critics.

After a fan account posted a photo of Khloe, True, and her nanny out and about, the Good American executive shut down the haters in the comments section, according to Glamour. One commenter wrote, "Khloe acts like she can't go anywhere without her nanny," noting that her hired helper appears in photos of her and True at "the market, a party, or lunch" often. Khloe clapped back, saying: "I choose to invited whoever wants to come to fun outings. We all love and enjoy the farmers market and it's so fun to go places and create memories together. I hope you have a happy and blessed day. I also hope that you are very kind to the ones that are kind to you."

There's no shame in having help, everyone needs it, even if your schedule isn't quite as busy as one of the Kardashians'. In fact, it would be refreshing to see the famous family talk more about the help they have raising their kids to do away with some of the stigma associated with having a nanny and, who knows, maybe one day they will.