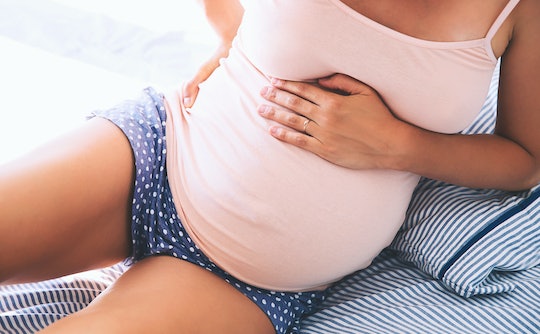 If You Think Labor Will Happen Suddenly, Here's What You Should Know

When I was pregnant with my son, I planned every detail that I could. I went to birthing classes, I took tours of my hospital's birthing center and traditional labor and delivery floor, I made a birth plan, packed bags full of books and other things to distract me while I labored, and I practiced Lamaze breathing. However, when the time came, things moved much more rapidly than I was prepared for. I had no idea it could happen like that. I never asked my labor coach, "Does labor happen suddenly?" Because other than a few wild television stories, I was pretty sure it was a prolonged marathon of an event — not a sprint to the finish.

While labor is commonly a long process drawn out over a period of several hours or even days, according to The Journal of Clinical Medicine Research, there are cases where labor comes on suddenly with little-to-no warning. When this happens, it's known as something called "precipitous labor," and it happens in under 5 percent of all births. It is clinically more common in women with hypertensive disorders, who are teenagers, or in the case of preterm births, but, strangely enough, it is not more likely to result in a negative outcome than regular labor within the same parameters, according to the research.

When I went into labor with my son, I wanted to labor at home and go into the hospital once the contractions got closer together. My OB-GYN and I had a lengthy gameplan, and I'd prepared. I wanted to have some food, take a shower, maybe catch up on the latest episode of Lost. Basically anything to keep my mind off of the pain and keep me comfortable in my own home. My grandmother-in-law had even planned on making me a myriad of special Hainanese dishes that were designed to fuel me through the birth and soup to replenish me afterwards. It sounds great, doesn't it?

It didn't happen. Early that morning, I began to feel what I thought were more Braxton Hicks. The contractions were uncomfortable, but not unmanageable. I went back to sleep, and a few minutes later woke up to an incredible amount of pain. Within the span of an hour, they went from 10 minutes apart to eight minutes apart to four minutes apart, and they lasted an average of 90 seconds each. By the time I got to the hospital, I would have my baby within three hours. I was told it was a "precipitous labor."

Does labor happen more suddenly for certain mothers? According to the Journal of Clinical Medicine Research, "Precipitous labor is defined as expulsion of the fetus within less than three hours of commencement of regular contractions." Thank all of the gods it's unusual, but if you have one precipitous birth, you are more likely to have another, according to the American Pregnancy Association. My second labor and delivery was fast — especially considering that I was induced. All in, it was under seven hours, including having my membranes stripped and then receiving Pitocin. But I am so grateful it was nothing like the first.

According to the Mayo Clinic, most women ease into the labor process. They lose their mucus plug, and then they get the odd contraction or two. Over a period of hours or days, those contractions gradually become more regular and they enter the phase of active labor we most closely associate with childbirth. When it is taking a disproportionately long period of time, it's called a "prolonged labor" and sometimes requires medical intervention, although to what degree is under some scrutiny by researchers and physicians. Thankfully, most babies come right on time, which changes dramatically as they age and it takes them 40 minutes to put on their shoes and find their backpack. My son could use a bit more of his initial speed at this point.

More Like This
Can The Way You Sleep Really Turn A Breech Baby?
These 4 Sleeping Positions Will Keep You Comfortable After A C-Section
Here's The Best Time To Remove Your C-Section Tape
What You Need To Know About Using Hair Removal Cream During Pregnancy