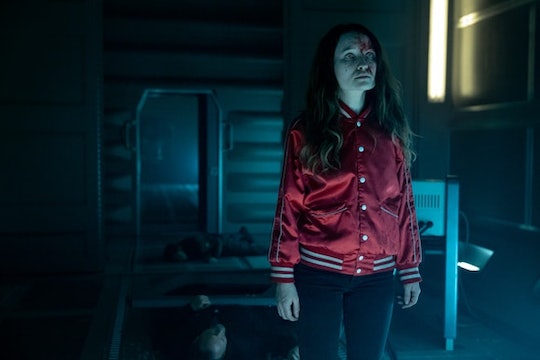 Death has been part of Laura Moon's journey on American Gods since the very beginning. When she was a bored and possibly depressed casino worker, she almost took her own life; she was later killed as part of an elaborate plot by a mercurial god. She's gone almost as soon as she's introduced. But she always finds her way back. Laura does die on American Gods, but she rarely stays dead.

Though, technically, Laura is still dead. You may find her walking and talking every Sunday on Starz, but she's also slowly decaying. She died in a car accident shortly before her husband Shadow Moon was released from prison in the pilot. She'd been having an affair with his best friend Robbie while he was gone, and they were hooking up in the car when it all went awry. Then the Season 1 finale revealed that the entire event was orchestrated by Shadow's new employer, the strange and mysterious Mr. Wednesday.

Laura's life might have ended there, but another accident — a real one — brought her back to life. Shadow had acquired a magic coin from the leprechaun Mad Sweeney and he left it on Laura's grave. When the coin came into contact with her body, it revived her.

Now staying alive is entirely dependent on the coin. It's like Laura's battery: it allows her to have a facsimile of a real life, with super strength and a Spidey sense for her erstwhile husband. But while it keeps her functional, it doesn't maintain her body at all. Laura has been slowly decomposing since she rose from the grave. And if the coin is dislodged, then it's game over. She lost the coin briefly after an accident on the road in "A Prayer for Mad Sweeney," but once it was returned, she was back to her old self.

Since there are such obvious downsides to Laura's new life (the smell of death is not something that can be cured with a puff of perfume), she's been chasing another alternative. She and Mad Sweeney arrived at Easter's home at the end of Season 1 hoping for a resurrection, but it proved to be impossible. Laura was killed by a god, and that kind of thing can't just be undone.

Laura is already dead, but there's a chance that she could suffer a second, true death if she loses her coin again. She doesn't have to worry about Mad Sweeney coming after it anymore because he has a personal interest in keeping her alive, but that doesn't mean another scuffle won't send it flying. Another god could also choose to kill Laura, either as revenge against Shadow or just to get her out of the way. One day she might even choose to get rid of the coin herself.

But this is all speculation. Right now, Laura is alive on a technicality, and I don't see that changing anytime soon. It's anyone's guess whether she's resurrected for real or returns to her grave for good. Either possibility is likely, but the outcome isn't easy to predict.