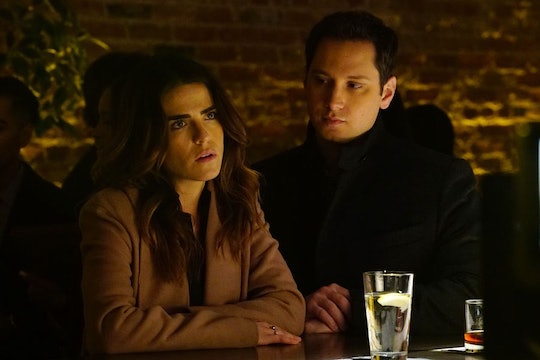 Laurel May Figure Out Wes' Killer On 'HTGAWM'

During the season finale of How to Get Away with Murder, Wes' murderer was finally revealed. While the first hour of the finale had all the fingers pointing at A.D.A. Todd Denver, it turns out he wasn't working alone. Dominic, the man fans thought Todd hired to kill Wes, was actually working for Laurel's father, Jorge Castillo. There are still a lot of questions surrounding Wes' death, but one has to wonder does Laurel know her dad killed Wes on How to Get Away with Murder? Probably not, but knowing Laurel, it won't take her too long to figure it out.

Right before Laurel was going to shoot Charles Mahoney, who turned out to be Wes' real father, Dominic stepped in, stopping her. Laurel was obviously surprised to see him and hesitated before introducing him to Michaela and Asher as her "family friend." In an interview with Entertainment Weekly, executive producer Pete Nowalk gave a possible explanation for Laurel's hesitation. "I think she's hesitating because she's like, 'This is a little convenient that he's showing up here on this street right now,'" he said. "I think Laurel is really smart, so her mind is immediately jumping to what the hell is going on here."

Out of the Keating Four, Laurel and Michaela have always been the smartest of the group and there's no doubt that Laurel will be able to piece together what her father did to Wes. It's really just a matter of what she'll do after she figures out the truth. She was willing to kill Charles when she thought he was responsible for Wes' murder, but will she be willing to kill her own father? Probably not, but she will want her revenge.

Also, according to Norwalk, fans will probably be seeing more of Dominic in Season 4, which most likely means he'll be sticking around a bit longer to keep an eye on Laurel. It's still unclear why Laurel's father had Wes killed, but Norwalk hinted in the same Entertainment Weekly interview that Laurel's dad's desire to be in her life is "complicated" and "really messy." He also mentioned that whether Laurel suspects him immediately or not, she won't be happy to see him.

"I think she's going to be really upset, to say the least," Norwalk stated. "I think it could start some real family drama." Or some family murder. You never know with this show. Whatever happens next there will surely be more twists and deaths to come. Until then, let us continue to mourn Wes and hope no more of our faves get killed off next season.