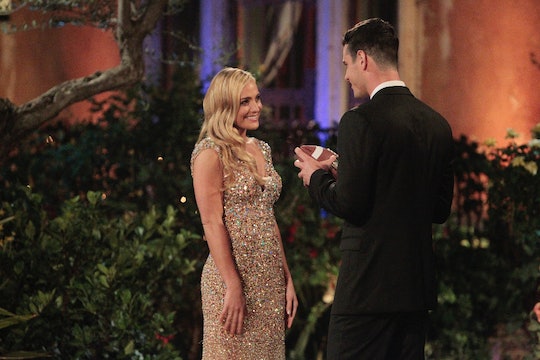 Does Leah Leave 'The Bachelor?' The Contestant Got Dumped After A Particularly Rough Week

On this week's Bachelor, Caila was the lucky recipient of a one-on-one date with Ben. It was her second of the competition, for those of you keeping count. And in darker news: Leah got dumped.

There are still three women who have never gotten a one-on-one with Ben, and, for one of them, the snub felt like "a huge slap in the face", to say the least. "I'm speechless. I don't know why I'm here," Leah revealed in a cutaway interview. "I'm pissed with the decision he made to bring Caila on another one-one-one. I think it's kind of bullshit. Now I'm questioning everything."

While Ben was on his fishing date with Caila off the coast of the Exuma Islands in the Bahamas, Leah completely broke down in a bathroom sob-fest with Lauren H. "There's no reason for me to be here," she said. "I'm not going to put myself through a two-on-one if he doesn't want to get to know me. It's not fair. There's no reason I should be here."

Lauren H. gave Leah the age-old Bachelor comfort line of "maybe he was feeling unsure about Caila" and that's why Ben chose to spend more time with her, rather than someone who hadn't had any time with him yet. Needless to say, Leah wasn't feeling the excuse.

"If he was unsure about Caila, he would put her on a two-on-one," Leah reasoned. "But to give her that time again and not give me the chance is just wrong. I look like a fool. I look like a total fool for putting myself through this. I don't understand why he would keep me here for this long to do that to me."

For what it was worth, Ben seemed to have a terrible time on the group date he later went on with Leah. She was able to share how disappointed she was to not have a one-on-one date with Ben, and he sort of awkwardly implied that if she really cared about having one-on-one time with him, she could play "steal him away" on group dates for private time.

Ben also asked Leah to "make the best" of the day, and she reluctantly agreed. Bizarrely, Leah later let her insecurities get the best of her once again, throwing Lauren B. under the bus during her cocktail party conversation with Ben and telling him she didn't think it would work out between them if he chose her. That definitely served to turn Ben off, and also got Twitter pretty mad too, especially because she later lied about dissing Lauren in front of the women.

After the cocktail party, Leah knocked on Ben's hotel room door to concern troll him again about Lauren B, which seemed to make up his mind — Leah was getting dumped.

While he didn't tell Leah explicitly that her incessant tattling contributed to their breakup, he seemed really unsettled by the fact that a contestant would spend so much alone time with him talking about another woman. But, Ben also said privately that he felt a seed of doubt get planted with regard to Lauren B. Hopefully, he soon realizes that she was just an innocent bystander in another woman's jealous meltdown.