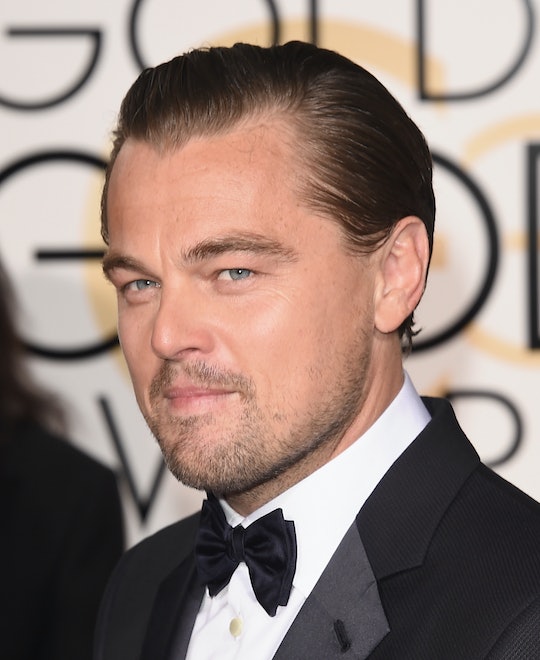 Does Leonardo DiCaprio Dislike Lady Gaga? The Golden Globes GIF During Her Win Certainly Implies It

Even if he doesn't win a Golden Globe, Leonardo DiCaprio won the night just by reacting to Lady Gaga when she bumped into him as she walked to the stage to accept her award at the 2016 Golden Globes. His reaction wasn't totally unwarranted — realizing you're in someone's way when they're on their way to the stage to receive a major honor is embarrassing — but it's led many to wonder: Does Leo dislike Lady Gaga? When Mother Monster bumps into him, DiCaprio jumps and cringes. But then there's something about the smile on his face once he realizes that it's her. His look could say, "Yeah, we know each other, but she just doesn't notice him in all of her excitement," kind of like when you wave to a friend in public and she doesn't see you. You could take his flinch to be just mild embarrassment. Or maybe the actor and the actress/singer don't get along IRL.

Better yet, maybe he is actually a little scared of her, which is the more amusing theory. After some intense research (that's what we call a few Google and image searches these days), it looks like Leo and Gaga don't know each other. They're both huge stars, so it's entirely possible they've met at some dreamy Hollywood party and just weren't photographed together or didn't have the chance to weed through all the other A-listers to get to each other. Better yet, it's probably likely that their paths don't cross very often. Just because their celebrities doesn't mean that have to be friends. As much as it's a cliché to say, celebs really are just like us (OK, maybe just a little bit).

Though, to be totally honest, it looks like that little jolt Leo gets when she walks by is actual fear, which isn't necessarily a bad thing or a wrong reaction. Lady Gaga is fierce AF. She's a presence. And ridiculously talented. And when she opens her mouth, like during her acceptance speech tonight, she can read eccentric sometimes. If anything, the best way to describe her might be intense. So it makes sense that Leo would be a little nervous to be in her way. Matter of fact, he should be. You don't mess with Mother Monster.

So if they're not friends, it's just Leonardo DiCaprio being a little shocked that she actually bumped into him. And that cringe? Probably just feels bad he messed up her entrance. Wouldn't want to trip Gaga, right? Maybe now they'll get to know each other.