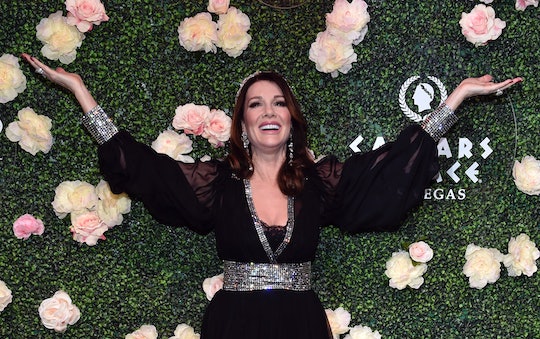 The Puppygate Saga Continues To Unfold On 'RHOBH'

The drama on The Real Housewives of Beverly Hills often spills off the screen and onto the internet, where quote-unquote "leaked" stories have the ability to reignite any argument in the blink of an eye. While the women pour champagne and debate who gave which rescue puppy away to whom, their real concern is who told the press about it. Most of the cast has become convinced that Lisa Vanderpump feeds stories to tabloids, but does she?

This is an accusation that has come up before on several different cities of The Real Housewives. Despite the fact that everyone is allowing themselves to be filmed for television, they appear to be very bothered when the things they do end up on Page Six or Radar Online. Dorit can't have everyone judging her puppy abandonment even though she did very much re-home that puppy! And then talked about it for weeks on camera for Bravo!

But it appears to add an extra layer of betrayal to the situation if Lisa Vanderpump was the one who spilled the story to Radar Online. And it's difficult to determine the validity of that. So many women on the cast seem sure of it, but Lisa has always denied doing it. It becomes a she-said, she-said situation.

And it's become the heart of the issue between Lisa and Kyle. Though they've been close friends for years, Kyle decided to raise the question about Lisa leaking stories to the press after hearing the other women talk about it so much. It caused a huge fight and, per Us Weekly, they still haven't made up. In a blog post for Bravo, Lisa wrote about how upsetting it was that Kyle didn't believe her. Lisa swore on her children's life that she was innocent of the things the other women were saying, which was why it hurt her so much that Kyle didn't take her at her word.

In the post, Lisa went on to say that when her personal information ended up in the press (like the 2017 lawsuit over breach of contract at Vanderpump Dogs that appeared in Page Six), she didn't object. Instead, she used the show to set things straight. She was open to sharing the painful realities of her life, concluding, "I have signed up to share my life honestly and that is what I have endeavored to do."

It sounds like Lisa is firmly maintaining her innocence, which means the claims of her feeding stories to the tabloids remain just a rumor. Perhaps if the other women produce some printed-out text messages with supporting evidence, it will prove their assertions. But until then, it's just a topic of discussion without proof one way or the other. Dorit's husband PK may think the word "nipped" appearing in the Radar Online story about re-homing Lucy Lucy Apple Juicy is confirmation that Lisa released it (because it's a word more commonly used by Brits), but it's hardly a smoking gun.

The other women of RHOBH may continue to believe that Lisa is running to the press after every little disagreement, but viewers will have to make up their own minds.