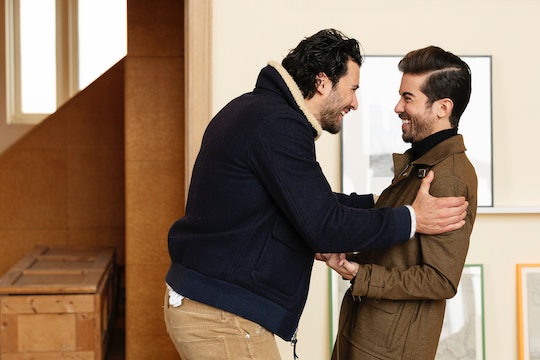 I Need To Know Who Luis Ortiz's Baby Mama Is ASAP

Season 8 of Million Dollar Listing New York is bringing fans a fair share of surprises. After years away from the New York City real estate scene, Luis Ortiz returned to the show with some major news. At the end of the Aug. 15 episode, through tears, Luis revealed he’s going to be a father, and fans couldn’t be more excited. But, because he hasn't revealed further details, many are wondering: does Luis have a girlfriend, and if not, who is his baby mama?

As of now, Luis hasn’t confirmed any information about this mystery woman, and his Instagram page is still pretty empty. So, until he decides to go public with details about his love life, viewers will just have to wait and watch through the season to see who she is.

Because Luis has been so private about his personal life, his baby news came as a huge shock for fans. In the Aug. 15 episode, as Luis spends time with Ronita’s (his former assistant) baby daughter, he begins to get emotional. In a confessional, he talks about battling depression and needing to be whole to really enjoy the things he wants in life.

"I’ve been through a lot these past two years, a lot of ups and a lot of downs, but everyday gets better, and seeing this only makes me happy,” he says in the episode. “It puts no pressure on me because I have my own time, and I can’t have all these beautiful things right now if there’s a big part of me that’s broken. I need to fix that first before I go on and have a family and have kids.”

Then, after a reflective pause, Luis realizes he hit a nerve, and holding back tears, he reveals he’s going to be a father. “I hope that’s not true,that I have to fix myself before I have a kid,” he says. “Because I am having a kid." From behind the camera a female producer is heard asking Luis to repeat himself, to which he responds, "Yeah, seriously. I'm having a kid. I'm having a baby girl."

Luis may not be sharing dating details right now, but on the Aug. 8 episode, he told his good friend and fellow cast member Fredrik Eklund he was in love with a woman named Nikita before coming back to New York, but had his heartbroken.

“I fell in love with a girl for the very first time in my life,” he says. “And when she left, she abandoned me, and I’ve never been abandoned before — I became very much in love with this woman. So, when we broke up, it broke my heart a lot, because, not only did I lose the person I was in love with, I also lost my best friend.”

I’m sure people are wondering if Nikita is Luis’ baby mama, or if it’s someone he met after his breakup. But, because Luis isn’t sharing any details in the media, fans will have to stay tuned to this season for updates.