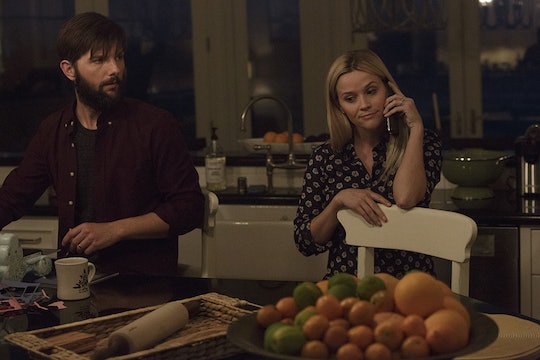 'BLL' Made A Big Change To Madeline's Story

On Big Little Lies, gossiping about others is Madeline's favorite activity, but there is definitely some dirt on her, too. She's currently married to her second husband, Ed, and working part time at a community theater. As we learned on last Sunday's episode, though, the theater director, Joseph, is more than just her supervisor. Not only did he kiss her, but he alluded to the fact that they've gotten together before. It's clear that she's trying to hide this from Ed, but does Madeline have an affair in the Big Little Lies book? Joseph certainly has a bigger role on the series than he did in the source material. (Warning: minor spoilers from the novel ahead!)

Joseph's character is still a theater director in the book, but you may have missed him. He doesn't have much of a role in the plot, and certainly doesn't play the role in Madeline's life that he does in the series. On the last episode, Joseph wanted to rekindle what happened with Madeline presumably a year ago after she came to discuss Avenue Q. She divulged to Celeste what happened in the back of the theater. At first it seemed that he'd sprung a kiss on her from out of nowhere, but the more Madeline talked, the more we saw how she was downplaying her part in the whole thing. And then Joseph later confirmed that this hadn't been a one time thing.

But did this relationship happen in the book? Seeing as he was such a minor character (so minor he's not even in the Wikipedia entry for the novel), no. Fans of the novel, like me, were in for a surprise when a suddenly new plot formed. I should've known, though: before Big Little Lies began, Reese Witherspoon told Variety that she asked executive producer David E. Kelley for a change in Madeline's character arc. This is certainly a twist and adds another lie to the "big little lies."

I'm interested to see where Madeline's affair goes in the series, and whether it affects the infamous Trivia Night. As this did not occur in the novel, I have no idea. This is the first time in the series where fans of the novel and new fans are on the same page in terms of guessing. Perhaps Madeline's affair will be revealed on Trivia Night amongst the chaos of the murder. Or, maybe Avenue Q will be put on its production and Ed will find out then. No matter what, both sets of fans will have to tune in to see how the affair unfolds.