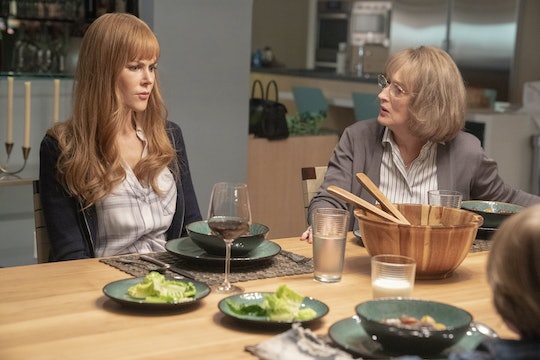 Two years have passed since the Season 1 finale of Big Little Lies, and it ended with a bang. Now that Perry's gone, the only five witnesses have bonded over keeping the secret of what actually happened. Thanks to creators and writers, the Season 2 premiere came in just as hot with the introduction of Meryl Streep's striking portrayal of Mary Louise — Perry's mother — who intends to find out the truth. With only a few people to question, does Mary Louise suspect Celeste on Big Little Lies, or is her curiosity about to unravel the lies of all five women?

So far this season (just one episode in) of Big Little Lies, Madeline (Reese Witherspoon) has been the biggest target of Mary Louise's degrading remarks, but she hints at an inevitable shift towards Nicole Kidman's character, Celeste. It hasn't been outright stated (and this is my opinion), but yes — I think she suspects something isn't right about the way Celeste is grieving.

Through their awkward interactions it's clear Mary Louise has her suspicions about Celeste and Perry's relationship. It's fair to say many mother-in-laws might feel just as displaced and grief-stricken as Mary Louise if found in this type of situation.

But there's something more just beneath the surface of Celeste and Mary Louise's interactions. For example, when Celeste wakes with nightmares of Perry, Mary Louise is the first in the room to provide some type of comfort, however misguided or badly worded. She's curious about what happened to her son, and rightfully so. This raises the question, did she really think Perry was a good man, or did she know of his dark side all along?

Of course there is also the complicated fact that Perry fathered Jane's (Shaliene Woodley) son Ziggy when he raped her and Celeste knows about it — even offering part of Perry's estate to Jane and Ziggy. When this news comes out, I think Mary Louise may do something more frightening than scream at the dinner table.

By the way she talks to the women it's clear something big is brewing. Could Mary Louise be the one to expose all the ghosts from everyone's closet? It's going to be brutal and I can't wait.

I think it's fair to say Mary Louise hasn't only come to town to help Celeste. Her odd nature and quirky — sometimes harsh — actions definitely have the "Monterey Five" a little anxious. Celeste, it seems, appreciates her help, but you can feel the tension rising. There are so many questions left unanswered, in Mary Louise's mind, and Celeste is likely to have the truth. My prediction for the remainder of the season is similar to what Reddit poster, TrentonTallywacker wrote in a Big Little Lies thread — that it will all come down to how much of the truth Mary Louise discovers. I'm confident she won't stay quiet about it, which means the fearless five should probably watch their backs.

What it all comes down to is, Mary Louise does suspect Celeste. She also suspects Madeline, and when she has the opportunity to pin the other women down, she'll suspect them, too. This mom didn't come to town to play. She wants answers and she wants them now and has all the makings of the perfect villain. With six episodes before the finale (likely of the series as a whole), I'm anxious to see what kind of damage Mary Louise is about to inflict of the women of Monterey, and how this "big little lie" will finally be exposed.