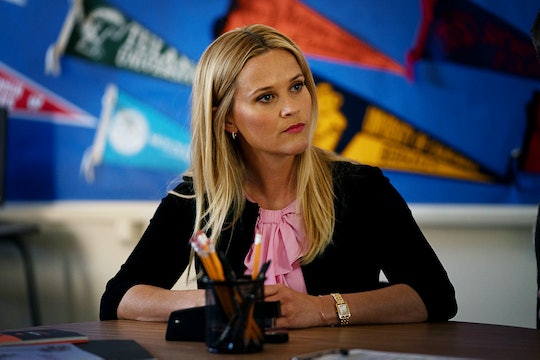 This Is The 'Big Little Lies' Feud I'm Living For

In case you haven't heard, HBO's hit series Big Little Lies is finally back and with the addition of the iconic Meryl Streep. As Perry's (Alexander Skarsgard) mother, Mary Louise, Streep has already delivered a stellar performance. Only one episode into the second season, there's still a lot more truth to unravel. The "Monterey Five" have the lie they're bound to while questions continue to arise about what actually happened on Trivia Night. So, does Mary Louise suspect Madeline (Reese Witherspoon), or does her behavior point to something else altogether? Let me break it down in a spoiler-free way.

I don't think I'm giving anything away by mentioning that Streep's portrayal of Mary Louise is quietly sinister. She's come to town to help her daughter-in-law, Celeste (Nicole Kidman), with the boys, since Perry's death. The circumstances of her son's death were weird to say the least, and Mary Louise wants to know what happened, as any mother would. The thing is, she's a hard one to figure out. Whether it's her immediate drag of Madeline saying, "little people are untrustworthy," or the pointed apology (that didn't much feel like anything genuine), fans like me can't help but wonder if, in Mary Louise's mind, Madeline is a prime suspect in Perry's death. There are even a slew of Mary Louise memes taking over the internet to prove I'm not alone here.

Mary Louise has good reason to suspect Madeline, and does seem to have it out for her, but that doesn't means she sees Madeline as anything other than someone who irritates her. Big Little Lies is good at throwing fans off (like the whole Jane and Perry situation), so it may be an intentional misdirect. Regardless, Madeline has that affect on people with her brash personality. That said, Mary Louise has already proven to be something of a mystery herself.

She first causes alarm bells to go off when she starts tossing casual insults at Madeline: "You're very short," which she follows up with, "I don't mean it in a negative way... maybe I do." Then there's the whole conversation about how she felt like screaming while eating dinner with Celeste and her twin boys — and actually does scream. Her behavior is odd, but her laser focus on Madeline is even more so. I guess that whole "he tripped and fell" thing isn't going to cut it with Mama Bear, and because Madeline is the one repeating it the loudest, she's an easy target.

One Reddit fan has an interesting theory about Mary Louise's presence this season, as told by Men's Health. Apparently the Season 2 poster could have some telling clues about what's to come. "Just noticed this little detail in the poster for Season 2," the BLL fan wrote. "The title letters are covering everyone’s mouths except for Meryl Streep. Symbolizes the vow of silence between all the ones directly involved. May have been pointed out before but I thought I’d share!"

At this point, it's safe to say Mary Louise suspects Madeline — IMHO — but she might also suspect the other four women as well. With so few details about what happened that night, fewer witnesses willing to come forward with the truth, and that "big little lie" as told by Madeline, it's no wonder Streep's character has a bone to pick. It doesn't matter how the truth comes out — because I'm sure it will — but I have a feeling Mary Louise will play a big part in whatever happens next.