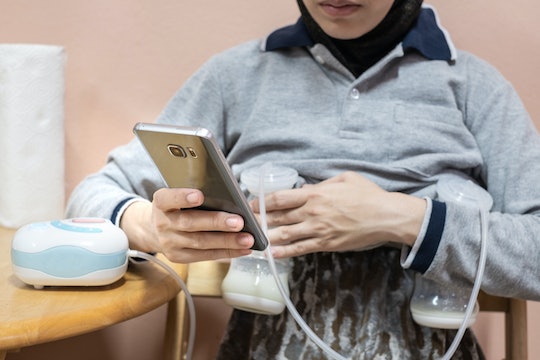 Um, So Breast "Milkshakes" Are A Thing & Could Actually Increase Your Milk's Calories

When I was breastfeeding, I must have tried dozens of tips and tricks to increase my milk production, though I can honestly say that shaking my boobs like a bottle of salad dressing wasn't one of them. Apparently, this is a thing that women are doing, and they claim that it's working. So should you shake or massage your breasts before you express your milk? It might make all the difference.

The shake so many are referring to is the "breast milkshake." It is a massage, stroke, and shake method of hand expression first described by The Lactation Institute's Chele Martin. It's gaining popularity once again thanks to International Board Certified Lactation Consultant (IBCLC) Sarah Lester, who posted about it on Facebook. She recounted that in March, a group of IBCLCs attended a meeting where they discussed and displayed a "crematocrit" machine, a tool that measures the caloric content of breast milk. She wrote in her post that, normally, this machine would be used to test milk in several samples throughout the day, but that the women in attendance who were lactating wanted to determine the caloric content of their own milk. "I tested my first milk, my last milk, hand-expressed milk, milk from my regular pump, and milk from my portable pump," Lester wrote, and reported that the "breast milkshake pumped milk yielded 33.9 calories per ounce, while no hands-on pumping yielded 26 calories per ounce."

That doesn't sound like a lot, but if you have a baby who is drinking on average 25 ounces of milk per day, according to KellyMom, it ends up being the difference of almost 200 calories per day. At the end of the week, that could be 1400 calories, or around two fifths of a pound. When my daughter was struggling to gain weight, this would have been an absolute blessing to me. I tried everything to amp up my milk from brewer's yeast supplements to lactation cookies, and few seemed to have any effect.

I contacted Lester, and asked her directly, should you shake your breasts before you express your milk? She tells Romper, that it's not so much a shake, but a way of manipulating your breasts that eases hand expression. On the whole, Lester says that milk from "hand expression in general yields a higher calorie count, anyway." She says that it's "likely due to the massaging and hands on effort."

The higher calorie count isn't just about shimmying your boobs like you're Rose Nyland in a charity dance-a-thon (although by all means, try that method — maybe skip the cartwheels, you just had a baby, after all). Irritatingly, the quality is a product of consistency. Lester tells Romper that research has shown that frequently emptying your breasts leads to a higher calorie content in your milk. When your breasts have a chance to build the milk from scratch, rather than topping off the reserves, it improves the quality and ease of the production, according to the Children's Hospital of Pennsylvania (CHOP).

Lester wrote on Facebook that shaking the breasts accomplishes essentially the same thing that happens from shaking up a gallon of milk or bottle of salad dressing. It pulls the fat from out of where it has settled in the alveoli, and mixes it up with the lighter, more watery milk, making it more consistent and rich throughout. If you do this every time you express, and you keep emptying your breasts regularly, you're probably going to get a great return, according to Lester.

To breastfeeding people who feel like they are struggling to keep up and put weight on their babies, every bit of help can be a big deal. As it turns out, you might just need to shake things up a bit.

More Like This
Can You Burp A Baby Too Hard? A Pediatrician Shares Tips For Gassy Tummies
How Many Elves Does Santa Have?
How To Make Santa Footprints
Moms, Just Eat The Fruit Dammit