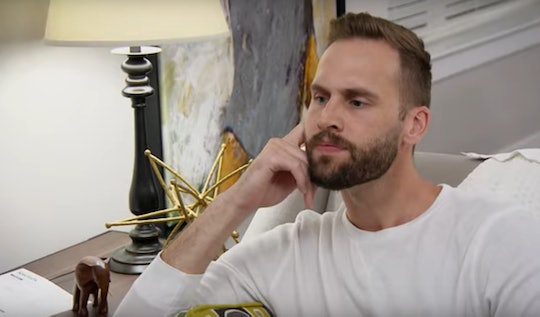 Matt Gwynne and Amber Bowles seemed like one of the most promising couples on this season of Married of First Sight, but as they came upon their one-month anniversary, Matt started exhibiting some pretty shady behavior. Amber feels like Matt is distancing himself, and she thinks it’s because he has someone else in his life. But does Matt have another girlfriend on Married at First Sight?

In Episode 8, titled “How Can I Trust You,” Matt disappears for an entire night, only to return to Amber the next afternoon with a lame explanation for where he was. In a video confessional through tears, Amber talked about how hurt she felt that Matt left without telling her, and how he suspiciously left his wedding ring at home. “It’s two-o-clock in the afternoon and Matt didn’t come home last night,” says Amber. “And I haven’t heard from him all day. This is Matt’s wedding ring, and it’s here, so Matt did not wear this last night when he went out.”

When Matt finally strolls back into their apartment, Amber tells him she’s not happy. “I thought I was just going to come back here and watch the game,” he explains half-heartedly. “It was just kind of last-second stuff. So, I should have let you know.” Amber points out that he left his wedding ring at home, and suggests it’s a sign he wasn’t taking their marriage seriously. Matt tells her he took the ring off to work out, and just forgot to put it on when he left home. He tells her he ended up staying at a “buddy’s house” and promises he’ll do better to communicate his plans in the future. Amber decides to let it go, and gives him a hug to make-up.

When talking to Married at First Sight Unfiltered, Matt insisted he was hanging out with his friends because he just needed some space. He said that he felt Amber’s personality could be “overwhelming” at times and that he was struggling with doubts about their marriage.

In Episode 9, the two celebrate their one-month anniversary, and it looks like Amber is really trying. On the other hand, it feels like Matt is only going through the motions. He hands Amber an unimpressive bouquet of flowers and a single serve dessert, and serenades her with a song.

In a preview for Episode 10, Amber tells Dr. Viviana Coles that if she had to make a decision right then, she would end her marriage with Matt. “If I had to make a decision today,” she says in the clip, “it would be a big fat no.” While talking to Matt separately, Pastor Calvin Roberson asks him where he’s been when the cameras are off, and whether or not he has another girl.

It’ll be interesting to see what Matt says, but I have a feeling he’s going to stick to his “I’m just overwhelmed” story. If Matt does have someone else in his life, I truly hope he takes the high road to confess, sparing Amber any further heartache.