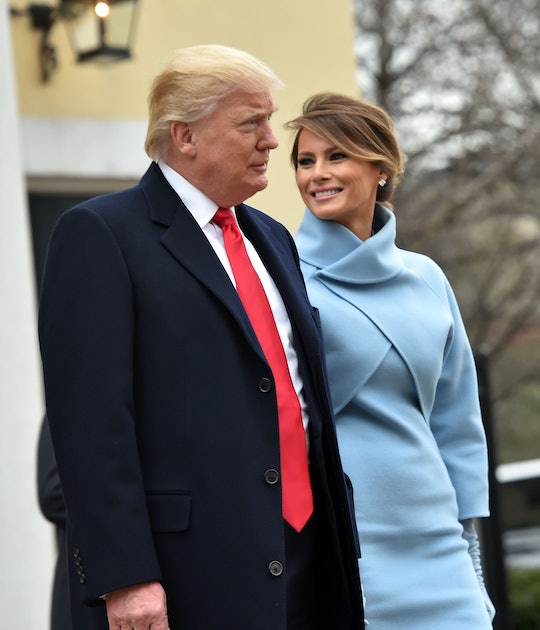 Now that she's moving into the White House, interest in Melania Trump has risen dramatically — and people are realizing they may not know the incoming first lady all that well, especially when it comes to her personal life. What's her family like? Does Melania Trump have siblings? These are just some of the questions people want answered on Inauguration Day.

As it turns out, Melania — born Melanija Knavs — comes from a busy childhood in Slovenia, according to The New York Times. Her dad, Viktor Knavs, was a chauffeur-turned-car-salesman, and her mother, Amalija Ulčnik, worked at a children's clothing factory. Viktor and Ulčnik had two children together: Melania and her older sister, Ines.

According to GQ, however, Viktor also had a son from a previous relationship, Denis Cigelnjak, meaning Melania has both a sister and a half-brother — although Cigelnjak and the two Knavs girls didn't grow up together.

Melania, however, has fond memories of her time growing up in Slovenia. "I love my childhood," Melania told GQ last year. "It was a beautiful childhood."

According to one childhood friend that spoke to The New York Times in July, President-elect Donald Trump reminds some of Viktor Knav's self-assured ways. "Donald and Melania are similar to Viktor and Amalija," Nena Bedek told the newspaper. "Melania was closer to her mother than her father. Viktor was often away, and Malci and the girls were often alone."

Melania has passed on some of her upbringing to Barron, as well: her 10-year-old son speaks fluent Slovenian, and according to People, he can also chatter away in French. He often speaks Slovenian to his maternal grandparents.

In her speech at the Republican National Convention, Melania addressed her roots and her move to the United States, as well, saying,

I am fortunate for my heritage, but also for where it brought me today. I traveled the world while working hard in the incredible arena of fashion. After living and working in Milan and Paris, I arrived in New York City 20 years ago, and I saw both the joys and the hardships of daily life. On July 28, 2006, I was very proud to become a citizen of the United States — the greatest privilege on planet Earth. I cannot, or will not, take the freedoms this country offers for granted.

Unless you knew what they looked like, there appeared to be no sign of Melania's parents or siblings at the inauguration. No one reported on their presence and a simple Twitter search doesn't turn up photos of them there. But if you watch full video of the inauguration, they can be seen at the inaugural ball and standing behind Melania during the inauguration proceedings. Melania attended along with Barron and the president-elect's other children, celebrating as her husband was ushered in as the 45th president of the United States.

Correction: This post previously stated that Melania's parents were no where to be seen at the inauguration, but ABC's full video of the event does show them in the crowd behind Melania. The post has been updated to reflect this information. Romper regrets the error.