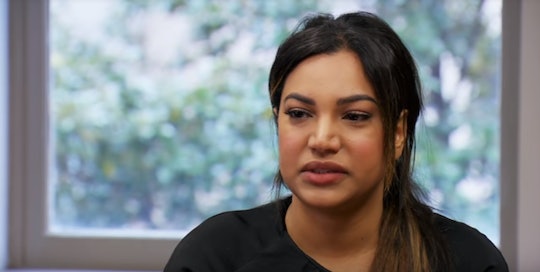 The star of the latest season of Married at First Sight is definitely Mia Bally, whether she wants to be or not. After marrying Tristan Thompson, Mia was arrested at the airport, preventing them from going on their honeymoon to Cancun with the other couples. Although Mia and Tristan appear to be ready and willing to move past Mia's arrest, fans are still very curious about Mia. One of the best ways to learn more about a person these days is through social media so does Mia from Married at First Sight have Instagram?

Mia does have an Instagram but it is private so you will have to request to follow her and hope she accepts. She does appear to have a public Twitter account, but it's hard to say if it's really Mia's account. It was started only in July and has two tweets. The only person she's following is Dave Flaherty, who is also on this season of Married at First Sight. The account is also not verified.

Based on this, it appears Mia is trying to keep a low profile these days, which is totally her choice. Besides what's shown on the show, Mia does not have to tell anyone anything about her life or her story, other than her husband.

It was revealed on the show and in the news that there was apparently a warrant out for Mia's arrest on three stalking charges and one charge of unauthorized use of a credit card. Newsweek reports that the charges were related to Mia's ex-boyfriend, Jared Evans. The couple broke up in 2016 and Jared filed two complaints with police in Monroe, Louisiana in 2017 and two more in 2018, not long before Mia married Tristan.

According to Jared, Mia contacted him on Facebook saying she ordered a Christmas gift. Jared allegedly received a receipt from Amazon that totaled more than $1,400; Mia had allegedly used his account to buy an iPhoneX and two protection plans. Jared then filed another complaint after Mia allegedly messaged him again, saying they had "fun times" in the past and she wished "we could go back."

In a police report obtained by Newsweek, Jared actually only reported a handful for the alleged stalking. "[Mia] has changed her Facebook name, continuously texted, called and electronically contacted him since ending the relationship," the report said.

But Tristan was willing to look past everything and make his marriage with Mia work. They got together with the team on Married at First Sight on the show to discuss Mia's lies to Tristan and get the real story out of her. According to Mia, after she and Jared broke up she rebounded with someone who she wants nothing to do with any longer. It's unclear exactly how this relates to Mia's arrest; perhaps this person was doing all the things Mia was accused off since most of these things occurred online. Regardless, the explanation was enough for Tristan who was ready to forgive and forget.

However, the couple still have some explaining to do. In the next episode, they will finally meet the other two couples who are, unsurprisingly, wondering why Mia and Tristan missed their joint honeymoon. In a sneak peek clip on OK Magazine, Mia and Tristan attempt to brush off the questions by saying they ended up having a "staycation" in Dallas, which turned out to be a good thing since Tristan got to meet Mia's parents. The other couples weren't buying it though, and eventually Dave just flat out asked what happened. Naturally, fans will have to tune in to the new episode to hear Mia and Tristan's answer to that question. Will they lie or just tell the truth?