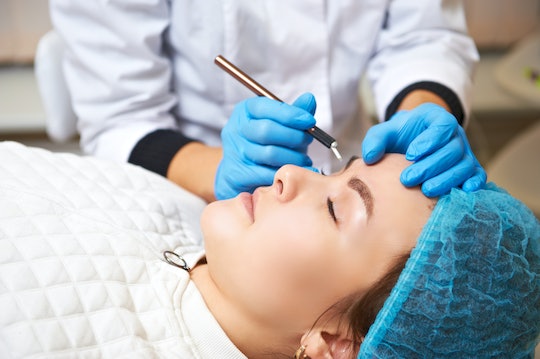 What To Know About Microblading & Scarring

Thick eyebrows are having a moment as of late. Heavy browed stars like Cara Delevingne and Lily Collins have sent women scrambling to mimic the look. But if you happened to be born with brows on the thin side (or if you plucked them beyond repair back in junior high school), the style isn't always easy to achieve. That's where microblading, a form of eyebrow tattooing, comes into play. If you're considering going under the needle, you might be wondering "does microblading scar?" Provided you go to a component professional and follow their step by step instructions for care, you should be able to walk away scar-free.

Though it's similar to tattooing, microblading doesn't use a tattoo gun according to Cosmopolitan. Instead, the stylist uses a special tool made up of a bunch of tiny needles to get the pigment under your skin, hand drawing it to look like individual eyebrow hairs. Using the right pigment is key for a couple of reasons. First of all, the color needs to match up with your hair and skin tone or it'll be obvious that you've gotten some work done. Secondly, using the wrong kind of pigment in microblading can damage your skin and leave scarring, according to the Ivy Laser Salon.

Your skin will be sensitive for a little while after having the procedure done. Brit + Co noted that you'll need to keep your brows slathered with ointment for at least a week to help the skin heal. Got Beauty added that you'll also want to make sure you don't scratch or pick at your skin while you're healing from microblading in order to avoid scarring.

After your first session of microblading, you might need some touch ups to achieve the look you want according to BrowStyling. If you are going back for another round, it's important to wait at least four weeks to give your skin time to heal and make sure you don't scar.

Microblading doesn't come cheap. Depending on where you live, it could run you anywhere from a couple hundred bucks to nearly a thousand. But if you're spending a lot of time and money on eyebrow pencils and powders, it could be worth the investment. Luckily, the results will remain for a decent amount of time— microblading can last anywhere from one to three years according to Nylon. So if you're willing to shell out the cash and endure a little pain, this may be the procedure for you.