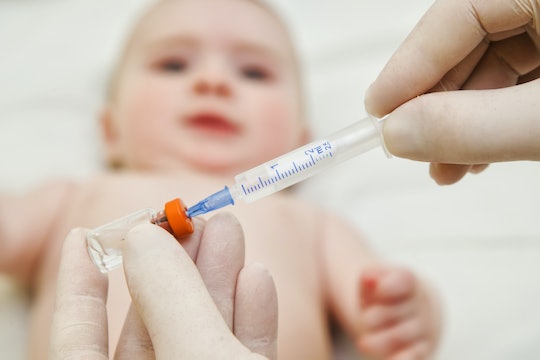 Last week I met my son in the hospital for the first time hours after his birth. When I arrived I was informed of all the tests and vaccines he had already been administered, but I could hardly register the words coming out of the nurse's mouth because I was so excited. Later on, though, and when I was snuggling my precious newborn son, I asked myself, "Does my baby even have to have the vitamin K shot?" I mean, what does it even do? Turns out, there are very good reasons for your newborn to have the vitamin K shot (that I probably should have known before, honestly).

According to Scientific American, "All babies lack sufficient vitamin K at birth, putting them at risk for severe bleeding in the brain or intestines until they get the vitamin by eating solid foods, typically around six months of age. The vitamin is essential for blood clotting, and a vitamin K injection after birth eliminates this bleeding risk."

The vitamin K shot has been given to newborns since 1961, according to the Center for Disease Control and Prevention (CDC), but only recently has the number of parents refusing the shot started to increase. According to a new study in the Journal of Medical Ethics, between 0.5 percent and 3 percent of parents decline the shot. Unfortunately, this seems to be spillover from the anti-vaxxer movement, and as un-founded and scientifically debunked worries about vaccinations have spread, certain parents have started to decline all shots for their newborns and kids.

But the vitamin K shot isn't superfluous. As highlighted by the CDC, the vitamin K shot can help prevent potentially fatal or brain-damaging hemorrhaging in babies up to six months old. Babies who are breastfed are at even higher risk for brain bleeding, according to the US National Library of MedicineNational Institutes of Health, because breast milk has less vitamin K in it. Formula, on the other hand, has vitamin K added, so formula-fed babies are at lower risk for potential bleeding in their brain.

While anti-vaxxer parents seem to lump all shots in together, Dr. Clay Jones, in Scientific American, explains that the vitamin K shot actually has no proven side effects. Dr. Jones goes on to say:

"The shot has no side effects other than the brief pain of the injection and rare but possible bruising, and has little to no risk of an allergic reaction because it is injected into the muscle instead of a vein."

If administered correctly, it could save your baby from brain damage that affects a handful of babies out of 100,000 without the shot.

Scientific American points out the dangers of lumping the vitamin K shot in with other vaccines. "A vital difference between declining vaccines and declining vitamin K is the time window for bleeding risk," says Steven Abrams, a neonatologist at Texas Children’s Hospital and member of the American Academy of Pediatric's (AAP) Committee on Nutrition. “It is important to clarify for families that there is an immediate risk to their baby of not having the vitamin K shot and there is no ‘delayed schedule’ that will work,” Abrams continues, referring to parents who allow vaccinations, but delay them until their child is older.

So yes, according to science, your baby should have the vitamin K shot at birth.