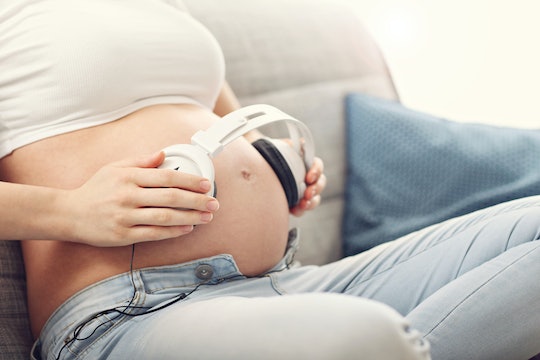 There are a lot of familiar images in our society of pregnant people lovingly placing headphones on their bulbous bellies. Not only is it adorable and comforting to start creating a bond while your baby is still a fetus, but there are more than a few rumors that associate in utero dance parties with late-in-life greatness. Rumors can't always be trusted, though, so does a baby hear music in utero? If so, can it increase their intelligence? Is sitting on your uncomfortable couch for 15 minutes with headphones on your pregnant belly really going to make a difference?!

According to the experts at What to Expect, around week 16 of pregnancy your little bean will likely begin to hear things that you don't even hear, like the workings of your internal organs. What To Expect goes on to say that, "By week 24, babies have been shown to turn their heads in response to voices and noises." In other words, mark your calendar for week 24, my pregnant friends, as that's a great time to get out those headphones and start playing music to your belly.

Before you pull those headphones out, though, make sure you know the reason why you're doing so. BabyCenter says listening to classical music in utero doesn't necessarily make your baby smarter. In fact, "No research supports the idea that playing music when your baby is in the womb makes her smarter."

BabyCenter also cautions to make sure you're not playing that music too loud, because even though researchers don't know what effect the music has on the baby's future intellect, they do know the sound levels can effect baby's future hearing. Bottom line, BabyCenter says, "Because research on this topic is in its infancy and experts can't seem to agree on whether music is enjoyable or bothersome to fetuses, proceed cautiously. If you decide to try it, remember that moderation is key."

One question that might come up for expectant mothers who choose to play music, even in moderation, is what devices are safe to use? What if you place your mobile phone or iPad on your belly to play music? Is that safe? The American College of Obstetricians and Gynecologists (ACOG) has no specific guidance on the issue of cell phone use during pregnancy, and the World Health Organization (WHO) concludes there is not yet enough research on the subject to make a recommendation. However, the National Institutes of Health (NIH) concluded in a 2015 study that the "use of mobile phones can be related to the early" miscarriages.

To err on the side of caution, it may be a good idea to go old school with headphones and a boombox to jam with your pregnant belly.