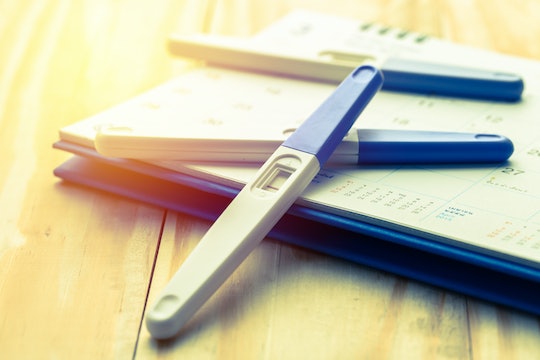 Does My Egg Count Drop Postpartum?

For many people, the subject matter of fertility is still something of a mystery. Knowing what factors affect it can get confusing. Does my egg count drop postpartum, for instance, or does it remain the same after giving birth? To learn more about this and other fertility topics, Romper spoke with Dr. Christos Coutifaris, reproductive endocrinologist at the University of Pennsylvania and President-elect of American Society for Reproductive Medicine (ASMR).

First, it's helpful to understand where the egg count fits into the overall picture of fertility. In general, a woman will produce all the eggs she will ever have early in her life. In fact, by the time a female embryo is around the 5 month gestation point, Coutifaris says she already has the maximum number of follicles in her ovaries, around 6 million . (Each follicle in the ovary contains one egg, according to the National Center for Biotechnology Information.) By birth, she has 1 million follicles left. At the point of puberty, a young woman has approximately 300,000 eggs remaining to work with through her lifetime.

If this attrition rate sounds alarming, some perspective is crucial. Because a woman ovulates around 300 to 500 eggs in her reproductive life, she still has 1,000 times more eggs than she needs at the start of puberty, Coutifaris says. It's a more positive way to consider the starting egg count.

There are many factors that affect the number of remaining eggs a woman has, also known as her ovarian reserve. The main factor is genetics. Specifically, Coutifaris says, a condition such as Turner’s Syndrome results in a fast attrition rate, meaning the woman may have no viable eggs remaining by the time of birth. Additionally, environmental or lifestyle factors, such as smoking, can also adversely affect a woman's ovarian reserve.

So will pregnancies cause a woman's egg count to drop? Most likely not. "Pregnancy should not affect in a positive or negative way her remaining egg counts," Coutifaris says. Think about the women from your great-grandmother's time, when it was not uncommon to birth 10 children. Their prior pregnancies certainly did not diminish their fertility. That said, if you have any specific questions about your own fertility health, then don't hesitate to visit your doctor for more information.