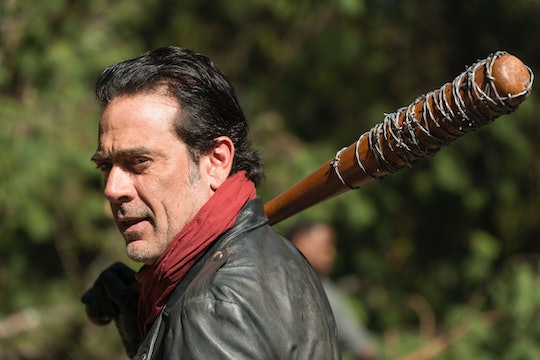 Negan wore out his welcome on The Walking Dead almost as soon as they rolled out the mat. There's only so much ankle-dipping and friend-murdering anyone can stand before they start clamoring for a character to meet a bitter end. But how soon can fans expect Negan's gory death? Does Negan die on The Walking Dead Season 8? Anything is possible, of course, but it's highly unlikely that he'll be a goner that soon — if ever. And the reason for that confident assertion doesn't come from spoilers or news of contract negotiations: it comes from the comics.

In The Walking Dead comics, Negan is still alive. Though the war brewing between the various factions did bubble over into a bloody conflict, it didn't end with Negan's head on the chopping block. There's been no indication that the show plans to deviate from the comics because it's gotten closer and closer to the source material over the last few years, especially when it comes to Negan. His introduction and subsequent murder of Glenn was nearly a frame for frame reproduction of the same scene in the comics. The television version of The Walking Dead might change details, move things around, or tweak the order of events, but the big things stay the same. Negan isn't going anywhere.

In the comics, the battle against the Saviors ended in a victory for Rick. He was badly injured in Negan's attack on Alexandria, but he was able to rally and strike back, slashing Negan's throat. Somehow, this didn't kill Negan; he recovered, but he did so imprisoned in a cell in Alexandria. He remained there for years until a disgruntled Alexandrian aided his escape, at which point Negan infiltrated a new group of antagonists called the Whisperers and brought their leader's head back to Rick in hopes of getting a gold star. Now Negan is helping Team Rick fight the Whisperers. I guess bludgeoning Glenn to death is just water under the bridge!

Showrunner Scott Gimple did reveal to Entertainment Weekly that there would be a solution to the conflict between Negan and Rick in the upcoming season. "The war will absolutely be resolved by the end of Season 8," he told the outlet. "Absolutely." If the show follows the comics, then Rick will triumph but Negan still won't die. That seems especially likely because a shot in the promo for Season 8 seemed to show a slightly older Rick — perhaps indicating that the time jump from the comics will happen on the show as well. If that's the case, then Negan definitely isn't dying anytime soon.

Unless Jeffrey Dean Morgan suddenly decides he no longer wants to be a part of the show, which also seems unlikely. In an interview with Playboy, he indicated that Negan could be around for several seasons. "I'll be around for a little while," Morgan said, adding.:

Negan is introduced in issue 100 in the comics, and he's still in it some fifty issues later. If we keep going at this rate, and if they follow the comic book, that could be three or four seasons. We haven't had a lot of conversations about what's ahead, but the show is in a rare position. Unless the audience just totally says, 'F**k off,' I think we'll be around for a while longer.

Morgan went on to say that his time on The Walking Dead is the most fun he's ever had, as well as the biggest challenge. If he's enjoying playing Negan so much and the audience continues to respond loudly (whether positively or negatively), it could keep Negan on television screens well past Season 8.