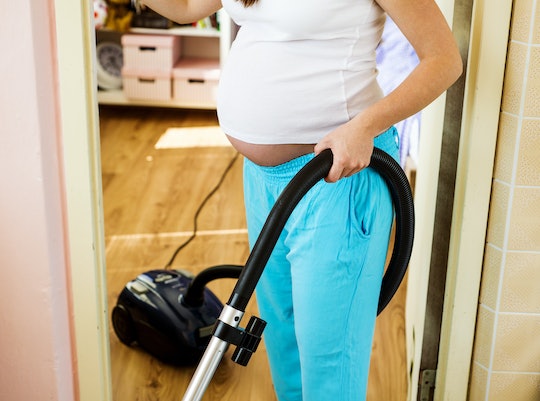 In the last weeks of my pregnancies, I became a tornado of cleaning, organizing, decorating, and yes, nitpicking. I went deep into nesting mode and didn't see the other side until I was so exhausted from giving birth that I no longer cared if I showered that day, let alone if my kid's bookshelves were color-coordinated. But was it just my personality, or was it something more? Does nesting mean labor is near?

The nesting instinct is by no means a distinctly human phenomenon. In fact, it's an evolutionary imperative that spans the breadth of motherhood throughout the animal kingdom, and yes, it almost always signifies the end of pregnancy, noted Midwifery. However, it should be noted that some part of the instinct is always in the maternal brain, found researchers at McMaster University. The instinct to protect your growing family and young is strong. Researcher wrote that the instinct grows throughout a mother's pregnancy, hitting its peak just before the baby arrives. They posit that this behavioral change is in response to a certain cocktail of hormones that multiply just before the baby is born. These hormones then trigger a reaction in the brain that spawns the need to clean, organize, and make your home safer and more comfortable for your little one.

There's actually a term for the confluence of instincts that take over your brain and body when you're pregnant — it's called "matrescence." Pretty word, right? I know it sounds like the name of an all-girl emo punk band from the 2000s, but it's actually a word meaning the process of becoming a mother. And it's a widely studied scientific phenomenon, the nesting instinct chief among them. It's one of the few instincts that are shared with almost all species of sentient beings on the planet. Birds, fish, mammals, and even insects look for a safe place for their young to be born. Think about it — bees build hives to protect the queen and feed the young, birds build nests, and even octopi and all their unusual mating habits look for a quiet, safe place to lay their eggs.

Humans are no different, even if our nesting looks unique from the outside. For me, it meant that everything had to be clean and tidy, but it also had to be well organized and designed. I painted rooms, I hung new curtains, I rearranged the furniture every couple of days towards the end. If you think my reaction was extreme, rest assured, it's perfectly normal, according to Scientific American. They wrote that each mother will manifest the instinct in their own individual manner, so that while I might have needed blue walls and and the perfect conversational cluster, you might need all new bath towels and drawer organizers.

So does nesting mean that labor is near, or even that it's imminent? Marla Anderson, lead author of the study and a graduate student in the Department of Psychology, Neuroscience & Behaviour at McMaster University said, "We have found that it peaks in the third trimester as the birth of the baby draws near and is an important task that probably serves the same purpose in women as it does in other animals," according to Science Daily. It's so cool to think of how all mothers are connected in this way, and also, it makes me feel a little bit better for the amount of mileage my vacuum got when I was hugely pregnant.

"It ties us to our ancestral past," Anderson added. "Providing a safe environment helps to promote bonding and attachment between both the mother and infants." Or at least, it tidies it up a bit. Either way, when the nesting instinct ramps up and you can't fight the urge to break out the window cleaner and chamois, it likely means that pretty soon you'll be unable to fight other urges as well — like the one to push.