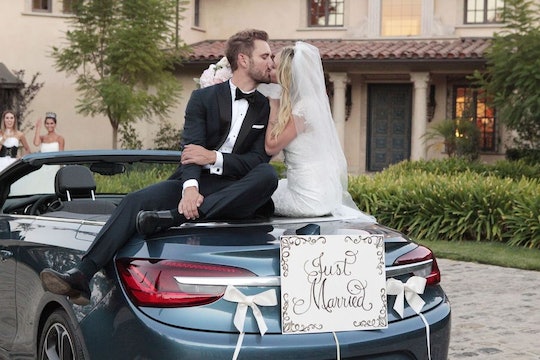 Nick & Corinne May Just Be Perfect For Each Other

Corinne Olympios made a big impact in the premiere episode of The Bachelor Season 21 even though she didn't end the evening with the first impression rose. Not only was she the first to lay a somewhat awkward smooch on Nick Viall, but promos for the season show her putting herself out there in a big way. She has no problem making waves in her quest to win Nick's heart, whether that involves flinging off her bikini top for a photoshoot or surprising Nick in his hotel room late at night. She's already being framed as the villain of the season, but considering Nick was once dealt the same hand, he could probably sympathize with Corinne more than a little. So does Nick end up with Corinne on The Bachelor?

At this point, it's anyone's guess; the season is still in its earliest days, which means it's way too soon to call the outcome just yet. However, Nick and Corinne do seem like they might have a connection even if it's impossible to say how that connection may grow or change over the course of the season. Nick doesn't mind Corinne's aggressive approach at all — in fact, he seems to appreciate it. That doesn't necessarily mean they're going to end the season as a couple, but it does bode well for them.

Nick told E! that he could see the similarities between himself and Corinne. "I am someone who is assertive, who goes for what they want, and Corinne is someone who does that," he said. "I don't think Corinne was in any way disrespectful. She took a risk and she went for it, and I think she is also funny. At the same time, everyone makes mistakes, and I think you'll see Corinne's journey as she kind of navigates through that."

Nick also spoke positively about Corinne in his episode-recapping blog post for People, seeming to admire her confidence in going after whatever — or whoever — she wanted. Though she did surprise him over the course of that first night, he also "respected the assertiveness" and "appreciated Corinne being confident enough to take a chance and put her relationship with me above everything else."

Nick also retweeted an interview Corinne did with Glamour, so if nothing else the two appear to be on good terms. He definitely seems to be supportive and understanding of her. Though their relationship got off to a dramatic start, it is possible that things will end up going well for Nick and Corinne. Even if they don't end up together, they may have enough in common to stay friends.