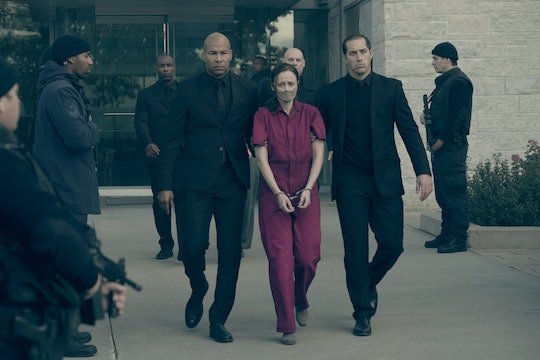 Ofglen Made A Bold Move On 'The Handmaid's Tale'

On The Handmaid's Tale, Ofglen had been in a precarious position from the start. Considered a "gender traitor" by Gileadan standards because she was a lesbian, she also belonged to Mayday, a group fighting the new totalitarian regime. However, it wasn't her political affiliations that led to her first arrest. A forbidden relationship with another woman resulted in Ofglen undergoing an extreme punishment. So upon her return in Episode 5 (spoilers ahead!) she was understandably demoralized — until she grabbed one last chance at freedom. But considering she already had one strike against her, what did her most recent rebellious act mean for her future? Does Ofglen die on The Handmaid's Tale?

It wasn't clear by the end of "Faithful" what would happen to her, but there wasn't much hope, either. Ofglen made a spontaneous escape attempt by jumping into an available car and in the process she killed a Guardian by running him over. Before she could get away, she was caught and thrown into a black van — the kind citizens are thrown in before they're never seen again. The episode didn't reveal Ofglen's fate, but considering how quickly dissenting voices are crushed in Gilead, it seemed clear that nothing good awaits her in the future.

Ofglen's relationship with another woman would have been punishable by death, according to Commander Waterford, but Ofglen's position as a fertile woman in the middle of a fertility crisis granted her some version of "protection." Ofglen was allowed to live, but she was also forced to watch her lover die before she was subjected to genital mutilation. The people in charge in Gilead have no issue with mutilating women in an attempt to control them: whether it's an eye or a hand, they don't care as long as the reproductive organs remain intact.

But one has to wonder just how much the government will allow a handmaid to get away with in the name of fertility. Even in Gilead an illicit relationship must be a lesser offense than theft, escape, and murder. In an interview with Yahoo! TV, Alexis Bledel didn't sound hopeful about Ofglen's future. At the very least, she was noncommittal about what would happen to Ofglen following her mutilation. "There's a bit more, but beyond that, I don't know," she said. "I want to know as much as you do!"

Bledel is credited on all 10 episodes of the first season, but the fact that she said there was only "a bit more" of Ofglen does seem worrying. It's possible Bledel was just trying to keep things spoiler-free, but Ofglen might have rebelled one time too many to survive.