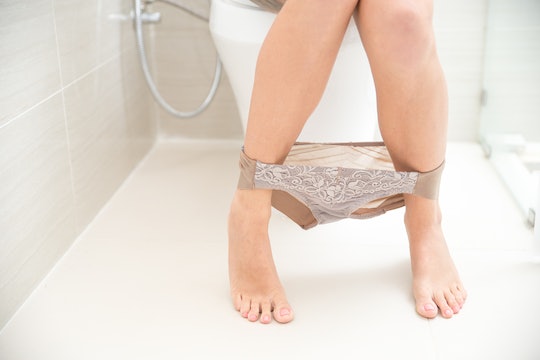 Whether you're trying to conceive, actively trying to not conceive, or simply trying to better understand your cycle, observing and understanding the symptoms of ovulation is important — and often a bit confusing. Some women notice changes in their discharge, while others cite telltale cramping. For others, ovulation can even cause spotting. If a bit of bleeding has you puzzled, you may fall into this category.

When my husband and I decided to start trying to conceive, I knew tracking my ovulation would be key. That said, I had no clue how. For me, it ultimately meant peeing on sticks daily to figure out my peak fertility days. For other women, it's apparently much more intuitive. My mind was blown when one of my girlfriends told me, "I can pinpoint exactly when I ovulate, and even which ovary I ovulate from." I've said it before and I'll say it again: Women's bodies are magical.

Now, back to the question at hand: is it normal for ovulation to cause spotting? Don't stress if you're experiencing it, because it is indeed a normal occurrence during this stage of your cycle. In a 2012 study published in the American Journal of Epidemiology, researchers tracked menstrual bleeding patterns among 201 women. Of 470 cycles observed, there were 13 noted episodes of mid-cycle bleeding during ovulation, or 2.8 percent of all cycles in total. There were no other significant differences in these cycles compared to others. In other words, while ovulation spotting is normal and nothing to be alarmed by, experiencing it puts you in the small percentage of women who do.

So, why exactly does ovulation spotting happen? Dr. Prati Sharma, associate physician at CREATE Fertility Centre and Assistant Professor in the Department of Obstetrics and Gynecology at the University of Toronto, highlights a few reasons. "Until you ovulate a hormone called estrogen is being produced by the growing egg (oocyte). This causes the lining of the uterus (endometrium) to thicken. Once ovulation occurs, estrogen levels drop and progesterone levels rise," Dr. Sharma tells Romper. "This hormone stabilizes the lining of the uterus and prepares is for possible implantation of a fertilized egg or embryo if conception, or pregnancy occurs. The change in levels of hormones during ovulation and the changes in the lining of the uterus can cause spotting to occur at the time of ovulation."

In addition to possibly seeing a bit of blood, there are a few other symptoms that commonly accompany ovulation. "It can be normal to feel cramping or mild pain (Mittelschmerz) on one side of the lower abdomen or the other during ovulation," Dr. Sharma explains to Romper, due to the egg being released. "Often women will feel this pain on the side they are ovulating every month in the middle of the menstrual cycle." To alleviate any ovulation-related discomfort, an over-the-counter pain reliever like ibuprofen typically does the trick, as well as relaxing with a heating pad or soaking in a warm bath.

While a bit of spotting around the time of ovulation is no big deal, it's important to note if the bleeding becomes heavier or more bothersome. Dr. Angela Le, the founder of Fifth Avenue Fertility Wellness in New York City, urges women not to overlook potential red flags or problems. "Women want to consult their physician if they are experiencing regular and heavy bleeding throughout their cycle," Dr. Le tells Romper.

The female body is certainly magical, and it's got a lot going on. In my experience, regularly wondering, "Um... is this normal?" is par for the course.

More Like This
Pelvic Pain During Pregnancy: What Causes It & How To Deal With It
What Is Acid Reflux Tape? Chrissy Teigen Swears By It
Parents Are Missing Work At Record-Breaking Rates To Take Care Of Sick Kids
An Honest Review Of The Nixit Menstrual Disc