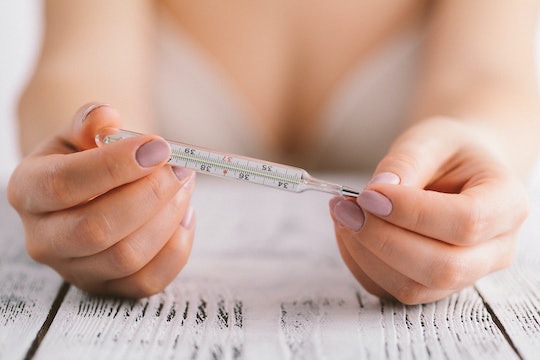 Does Ovulation Change After Having A Baby?

After having a baby, a woman's body endures a plethora of changes. Your body is in pain, your breasts are engorged, and your hormones are a little haywire. Those changes, however, are all fairly commonly addressed. What isn't as often talked about is your period or if ovulation changes after having a baby. And the reason ovulation after baby is a subject that may not be as easily accessible is because it's more individually based.

In an interview with Romper, Dr. Peter Engelman of Meritas Health Obstetrics & Gynecology says the topic is more complex than just a yes or no. The area, primarily, directly affecting ovulation after a baby is tied to breastfeeding. "Following the birth of her baby, if a woman is breastfeeding, she will likely experience the absence of ovulation and menstruation for the duration of the time she is breastfeeding, Engelman says. While breastfeeding, a mother can begin to experience menstruation and ovulation again four to six months after birth. It's important to keep in mind, however, that it's often inconsistent. According to BellyBelly, the longer your baby goes between feedings, as they age, the greater your chance and frequency of ovulation. Engelman adds that most women can expect menstruation and ovulation to return to normal anywhere from one to three months after they've stopped breastfeeding.

For women who choose not to breastfeed, around 80 percent have their period return within 10 weeks, according to the aforementioned BellyBelly article. Engelman adds that if a woman is bottle feeding, she may even have ovulation and menstruation return to normal as early as four to six weeks post birth. Additionally, the return of ovulation is possible without the presence of your period.

The chance of ovulation within the first six weeks of giving birth is very slim, according to the previous BellyBelly article. But because the return of ovulation is very individually based, there's always a chance if you're not refraining from sex per your doctor's advice the first six weeks post birth. Because ovulation is possible without menstruation, Engelman says it's important not to rely on breastfeeding as a form of birth control if you're wanting to prevent pregnancy. When you see your doctor at your first check up after birth, you should discuss contraceptives if you're planning to become sexually active again.

"Normal" can be different for each woman, Engelman says, and ovulation generally returns to the same frequency and flow as what each individual woman experienced before pregnancy. If there are notable differences in menstruation and ovulation, reach out to your OB-GYN to be safe. This also applies if it does not return within three months after birth or after breastfeeding.