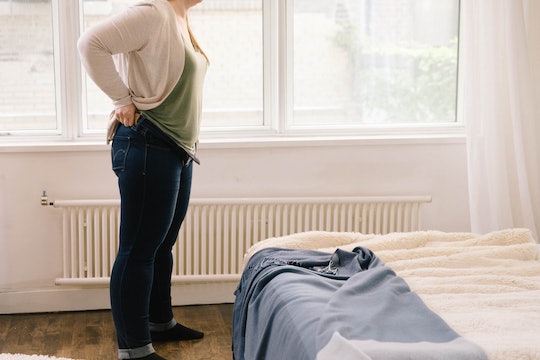 Turns Out, Your Bloated Feeling May Be Thanks To Ovulation

Is there anything worse than feeling like your belly button is about to pop through the front of your pants? Being bloated is legitimately one of the most uncomfortable sensations that happens to your body, but it's also incredibly frustrating when it comes to your clothing. Nothing fits, nothing feels good, and it sometimes feels like you're being tightened. What causes it though? Is it just food and gas, or can it be your cycle? Does ovulation make you bloated?

Bloating is a misery that seems to strike at the worst possible times, but it turns out, it might be predictable. According to the American Pregnancy Association, abdominal bloating is a common secondary symptom of ovulation, and it happens normally between days 12 and 14 of your cycle and can last anywhere from a few hours to a few days. According to the Mayo Clinic, this bloating can be severely exacerbated by the presence of ovarian cysts, which can become more painful and problematic during certain parts of your cycle.

According to the Mayo Clinic, this isn't usually a medical emergency but should be discussed with your healthcare provider at your next physical if it concerns you.

I have polycystic ovarian syndrome (PCOS) and endometriosis. Every month is like a carnival house of horrors during certain parts of my cycle — ovulation included. I can tell you immediately when I ovulate. I get achy as heck, I get a nasty headache, and the bloating is so bad, I don't like going out because even yoga pants are uncomfortable. Not to mention the fact that I look about four months pregnant for a day during my cycle.

That achy pain is a phenomenon known as mittelschmerz, according to Epigee. The word, which in German means "middle pain," may not be familiar to you, but many of you know its symptoms. According to the article, "Mittelschmerz refers to abdominal or pelvic pain that is experienced between periods. The word mittelschmerz actually means 'middle pain,' because this pain is felt during the middle of your menstrual cycle." It's commonly felt only on one side each month, but some women experience it across the whole of their lower abdomens.

While it's not immediately clear what causes the pain, most associate it with the dump of estrogen into your system during the period of ovulation and the onset of the luteal phase, noted Dr. Holly Thacker, director of the Cleveland Clinic Center for Specialized Women’s Health in an interview with Today.

Thacker told Today that beyond the general discomfort associated with a swing in hormones, "the hormonal upheaval can play havoc with the digestive tract." She also noted that “when estrogen is high, women seem to retain more water." It feels like gallons to some of us. The Cleveland Clinic noted that most women will achieve relief from over-the-counter drugs like ibuprofen, but some women will likely need further intervention.

According to Obstetrics and Gynecology International, the hormone combination of estrogen and progesterone is at fault. Estrogen has two peaks — one mid-cycle and one just after ovulation. Progesterone is low throughout most of the cycle, but peaks with the luteal phase. Researchers posit that when the two are at their highest levels, just after ovulation, women will experience something called "menstrual edema," or the swelling and bloating that some women experience. Oddly enough, they found that active women, particularly runners, were less likely to experience this phenomenon. I will tell you, I get far fewer issues when I'm leaned out from marathon training than when I'm at my comfortable weight.

While it's not considered a medical emergency, it can be painful and disruptive to your life. Talk to your OB-GYN and see if there's anything they can do to help you or evaluate the case further. You have every right to the best care possible, especially if you're feeling bloated.