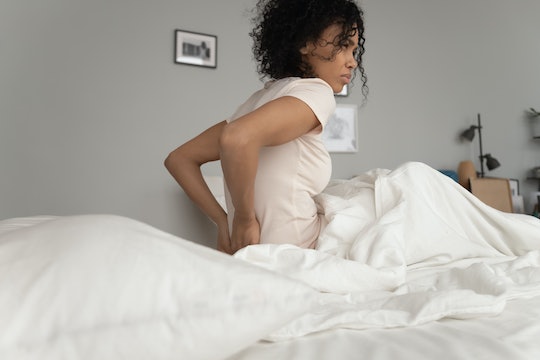 Here's Why Ovulation May Be To Blame For Your Achy Back

Aches and pains just seem to multiply as each year goes by, but some of the irritating everyday spasms, twinges, and soreness seem to rise and fall each month on a fairly regular cycle. This leads many to believe they might have more to do with their menstrual cycles than their age (or all those crunches they did). But can your cycle cause those aches? If your period's not due for a couple of weeks, does ovulation make your back hurt? If it seems like you're reaching for the IcyHot every month at the same time, there may be a real reason.

During your ovulation, there is a rise in estrogen just before you ovulate, and a rise in estrogen and progesterone right after ovulation, according to Endotext. The thing about estrogen and progesterone is that they wreak havoc all over your body, not just your reproductive system. According to the medical journal Spine, "In adult women, hormonal and reproductive factors are associated with chronic musculoskeletal pain in general. Factors related to increased estrogen levels may specifically increase the risk of chronic lower back pain." That means that the back pain you feel every month might very well be due to the hormonal changes that occur during ovulation. Researchers wrote that it affects the joints, ligaments, and muscles that aid in spinal support, causing the twinges of pain and downright annoying aches.

Another thing that controls ovulation (and is a huge part of your reproductive cycle) — prostaglandins — could be to blame. "An increase of prostaglandins just before and during a woman’s period can cause uterine cramping and pain in the vagina, thighs, back, and even buttocks," Dr. Mary Jacobson, Chief Medical Director at Alpha Medical tells Romper. Excellent.

And it's worse for women with disorders of the reproductive system like polycystic ovarian syndrome (PCOS) or endometriosis, according to Cedars-Sinai Health Center. Because not only are they dealing with additional disruptive hormone influences, they're also dealing with things like cysts, scar tissue, and pain in other areas that might exacerbate the symptoms of ovulation even further.

I will tell you that for me, my back pain radiates differently throughout my cycle. I have endometriosis and PCOS, so my body is attacking itself fairly regularly at this point. At the midpoint of my cycle, during ovulation, I get bloated, achy, and my joints and back become tender. This is not uncommon, noted the Gazette Review. Researchers wrote this is a possible symptom of the phenomenon known as "mittelschmerz."

Mittelschmerz, a German word meaning "middle pain," is the achy, crampy, bloated period that happens concurrently with the process of ovulation, noted The Cleveland Clinic. While it's not clear why it happens, doctors and scientists hypothesize that it's because the upset of hormones and fluctuations of these volatile influences can sometimes cause inflammation and water retention, which can cause bloating and even back pain. The Clinic noted that the pain is normally short-lived, lasting only a few moments to a couple of days.

But Jacobsen says this mittelschmerz could be to blame for your achy pains during ovulation, too. She says that in the average woman's cycle, she can ovulate anywhere between day seven and 21 of her cycle. And when that egg is released, the ovulatory pain (mittelschmerz) can cause "light pain or cramping on one or both sides of the pelvic area for some women."

Neel Anand M.D. wrote on EmpowHer that "the sea of hormones in the human body requires a delicate balance to operate at optimal therapeutic levels. In looking at estrogen, we can conclude that a surplus can put women at risk for developing spine pain."

Fortunately, there are good methods to managing the pain, noted the Cleveland Clinic, and there are a few different avenues you can pursue for relief. One are the tried and true over-the-counter remedies like naproxen sodium (Aleve) or ibuprofen (Motrin). Both of these are pain relievers and anti-inflammatory agents that decrease swelling and ease discomfort. The other thing the clinic suggested is that if it's really bothering you, you could consider going on birth control pills. They prevent ovulation and keep your hormones at an even keel all month long, thus hopefully preventing mittelschmerz aches and pains. As for myself, I am team heating pad and glass of wine, but that's just me.

If you're hoping to get pregnant during your cycle, relying on back pain to know when you're ovulating probably isn't the best idea. "Other signs of ovulation include light spotting, increase in vaginal discharge and sex drive, and breast tenderness," Jacobsen says. You can also use some natural family planning methods like taking your basal body temperature each morning, using ovulation test strips, and trying to hit your "window" during sex each month.

But if your back pain each month during ovulation is severe or lasting, The Cleveland Clinic suggested you call your OB-GYN and get evaluated for any additional problems that may be present and causing your pain. Otherwise, it's just another reason to look forward to menopause.

More Like This
A Mother’s Day Garden Of Grief
How A Recall Of Contaminated Formula Made The Formula Shortage Crisis So Much Worse
Should You Be Giving Your Toddler Melatonin To Help Them Sleep?
All Your Questions About Getting Pregnant After A Tummy Tuck Answered

This article was originally published on May 31, 2018