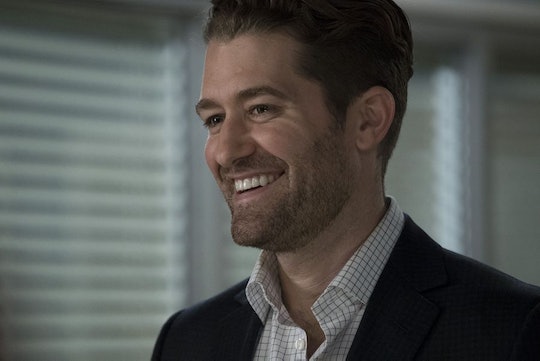 Someone's Life Hangs In The Balance On 'Grey's Anatomy'

The midseason premiere of Grey's Anatomy was just as shocking as it's midseason finale. After Jo faced off with her ex-husband, Paul, he ended up back in the hospital, but not as a doctor — as a patient. So does Paul die on Grey's Anatomy? He looked seriously injured.

When Season 14 left off last fall, Jo and fans were shocked when Jo stepped off the elevator and walked right into Paul Stadler, the man who has haunted her dreams for years. However, fans were even more shocked when it was revealed in Thursday night's episode that not only was Paul in town, but he also brought along his fiancée, Jenny. Supposedly, he wanted to get a divorce just as much as Jo did and that was the only reason why he was in Seattle.

Thankfully, no one actually believed that and Alex sent interns to make sure Jo was safe and then Meredith never left Jo's side while Jo signed the divorce papers and dealt with Paul. That being said it was obviously still terrifying for Jo to come face to face with her abuser, but at least she was able to call him out for being a monster to his face. She also attempted to warn Jenny about who Paul really was.

After having Arizona distract Paul, Jo sat down with Jenny and explained how Paul abused and manipulated her. Jenny didn't want to hear it. Still, Jo tried her best to convince Jenny to leave Paul and even gave Jenny her card with her information on it. Unfortunately, Jenny then turned around and told Paul everything and even gave him the card with Jo's contact details.

Paul then came back to the hospital and threatened Jo, telling her that he now knew how to find her. Although Alex assured her he'd always be there to keep her safe, Jo still didn't like it, and said that she wished he was dead. Of course, then at the end of the episode when Paul arrived back at the hospital after being hit by a car, it's not all that surprising that Meredith asked Alex and Jo, "What did you do?"

Alex and Jo will most likely be the prime suspects in the investigation into the hit and run. In fact, based on the preview, Jenny is convinced that Jo did it, though she assures Jo she didn't inform the police about it. If Jenny was so confident it was Jo, why not tell the police? Jenny didn't seem to believe anything Jo said, so why protect Jo?

Something definitely seems suspicious here, and if I had to guess, I'd say Jenny was the one responsible for the hit and run. Perhaps Paul finally showed his true colors and Jenny decided she wasn't going to be anyone's victim. Who knows? Regardless, thankfully in situations like these it should be pretty easy to clear Jo and Alex's name. It would be easy to tell if their car had been involved in an accident within the past 24 hours, so if police suspect them and go looking for evidence, they shouldn't find any. Right?

As for Paul's fate, he seemed to still be alive in the preview for next week's episode, but on Grey's that doesn't mean much. It's not as if this show is afraid to kill off people and Paul certainly isn't a beloved character.

You can tune into Grey's next Thursday at 8 p.m. EST to find out what happens to Paul and who was responsible for the hit and run.