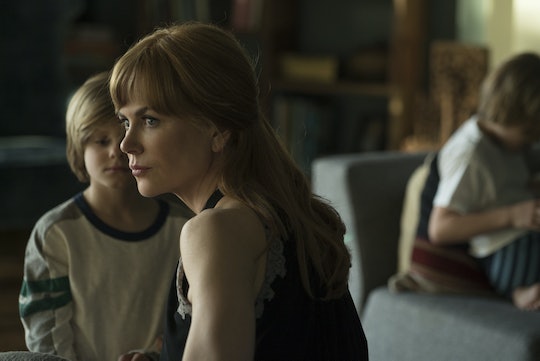 There's so much going on in Big Little Lies, you may forget the crux of the series: Trivia Night. A member of the Monterey community is murdered, and as of now no one knows either party involved. Well, some people do: those who read the novel by Liane Moriarty on which the series is based. For the most part, HBO's adaptation is pretty faithful to the novel, so many may assume the victim and murderer are the same. But given the events of Sunday's episode, I can't help but fear: does Perry kill Celeste in the Big Little Lies book? The series finale is rapidly approaching and ends in someone's demise. Could it be Monterey's best lawyer that will fall victim to Perry's wrath once more?

Much of Celeste and Perry's relationship in the series is, unfortunately, how it went down in the book. Perry is extremely abusive, and Celeste begins therapy to figure out what to do. In the latest episode, "Burning Love," viewers witness even more of Perry's violence. Something occurred, though, that did not in the book: during an argument sprung up over the fact that Celeste doesn't want to have sex, she hits Perry and injures his urethra in two places (yes, really). He's forced to go to the hospital — and, true to his character, is enraged. In fact, he later tells her that she's lucky he didn't kill her over what happened.

While this doesn't happen in the book, Celeste and Perry's dynamic is much of the same. Does Perry get so furious — on Trivia Night or otherwise — that he kills Celeste? Unfortunately, it would not be that far fetched. Celeste has feared for her life before, and she confessed that to her therapist. Not only that, but every day at least one woman dies due to domestic violence, according to Huffington Post. Celeste's death would be tragic, but we can see it coming, which is just as devastating. (Warning: major spoilers from the novel ahead!)

However, fans of the novel know that doesn't occur. Thankfully, sweet justice prevails: on Trivia Night, resulting in Perry's death. What's interesting, though, is that it's not by Celeste's hand — or Jane's, for that matter, who was assaulted by Perry years ago. Perry is actually murdered by Bonnie. She suffers from PTSD due to a past trauma of her own, and when Perry was revealed to be abusive, she pushed him off a balcony. There have been little differences to the adaptation — save for Madeline's affair, which Reese Witherspoon asked for, according to an interview in Variety. So I'm prone to assume that the Trivia Night events will likely stay the same. While it's horrible Celeste had to go through Perry's abuse, it does come to a swift end.