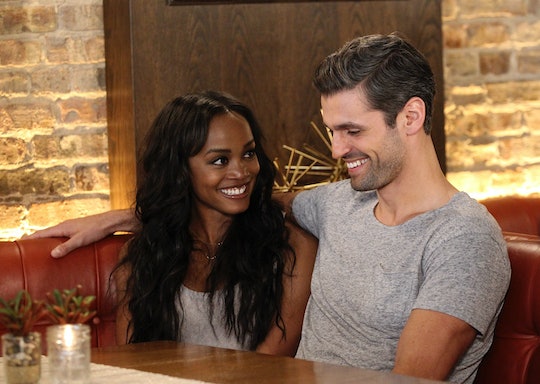 Peter Still Seems To Be Holding Back On 'The Bachelorette'

Dating on The Bachelorette is, understandably, different than dating in real life. Not only are contestants one of 30 going out with the same person, but if they reach it to the end of the competition, they're expected to propose (oh, yeah, and dating is a competition here). Peter, however, didn't seem to get the memo. He's expressed concerns over the possibility of proposing to Rachel, and thinks he hasn't had enough time with her. Rachel, however, is definitely looking for a husband at the end of this. Does Peter love Rachel on The Bachelorette? He seems to have doubts.

Of the four guys left, Peter seems the least enthused at the prospect of proposing to Rachel at the end of this season. Eric, Bryan, and Dean seem all in, and have expressed feelings of love for Rachel. Peter, however, has pushed back. During his hometown date, he still seemed to be into Rachel but was concerned about what it would mean if he made it to the end. He had Rachel meet both his family and friends to see what they think of her — and they all gave their approval. Even still, Peter said he didn't know if he wants a fiancée at the end of this experience.

I mean, I can't really blame Peter for these feelings. While it's not completely unheard of that people get engaged after a few months, it's not exactly common, either. Peter's thinking rationally about what he really wants in a relationship and future marriage, and he can't tell if he wants that with Rachel from the few dates they've had together. Rachel, on the other hand, wasn't happy about this. She said she wasn't here to have a boyfriend at the end of this — she wants a husband. Rachel wants that Neil Lane ring, and she's not playing around.

So, does Peter love Rachel? He definitely likes her a lot, but he seems to have his guard up in terms of telling her he loves her. I remember a similar situation like this: Rachel with Nick last season. She waited to say she loved him, and in the end she didn't make it to the end. Whether this will happen with Peter is unclear, but Rachel is definitely skeptical of him after his hometown date. Hopefully if he does, he learns from what happened with Rachel and tells her sooner rather than later.