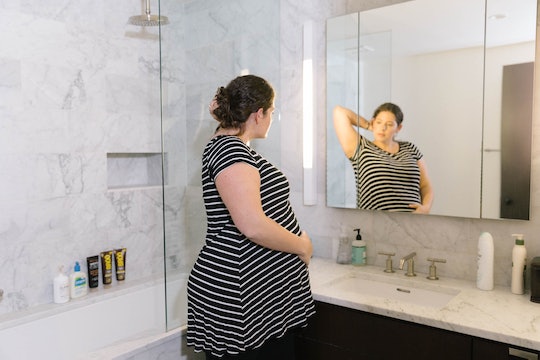 Turns Out, Pregnancy Can Really Do A Number On Your Hair

I have unpredictable hair. It is curly, frizzy, dry, oily, messy, and tangled. It's never been easy. I remember as a child my mother trying to brush my curls into submission and failing. I can't fault her, though. She has bone straight hair that hasn't seen a curl that wasn't chemically induced. As I've aged, my hair has only become more tiresome. It seems each year adds a new layer of questionable follicular behavior, and after having kids? It was so much worse. But, was that the hormones or age? Does pregnancy change your hair?

The hormones of pregnancy transform your body in myriad ways and your hair is just the tip of those manifestations. During your pregnancy, your hair begins to grow like you wouldn't believe and the shedding process is greatly dulled, according to Canadian Family Physician. Many mothers also report that their hair is shinier, healthier in appearance, and that the texture has changed — it can become straighter, curlier, frizzier, or smoother. The textural shift might be temporary, or the change might remain. However, the added growth and unshed hair will depart your head after you have your baby or when you begin to wean your child and the hormones in your body level out.

It's not just the hair on your head, either. The estrogen that causes the hair on your head to grow like mad and stick like glue has the same impact on the rest of your hair during your pregnancy, according to Behavioral Ecology. I do mean all of your hair. You might notice you have a lot more hair on your belly, arms, legs, face, and even your genitals. (Which can become more and more difficult to prune as that belly gets in the way.)

If you're feeling a bit unsettled by your hair growth, you're not alone. Cosmopolitan did an entire write-up about how Adele spoke candidly about her own pregnancy beard and that fuzzy uprising that happens to so many of us. Fair warning, though, depilatory creams like Nair and their ilk are not safe for use during pregnancy, according to Canadian Family Physician. Also, with the increased blood flow in your body during pregnancy, waxing may leave you a bit more raw than it ever has before. Trust me on this one. Learn from my experience.

I spoke with hairstylist Anita Havetskya of Brooklyn, New York, and she tells Romper that pregnancy is hard on the hair. "When you're first pregnant, you're not losing any hair, and it looks really good. Then, it grows in funny sometimes, really frizzy like yours or maybe it's all of a sudden straight," she says. But Havetskya notes that because of these changes, this is not the time to drastically altery your hairstyle. "You will regret it. Everyone who chops their hair during pregnancy does." Not to mention the fact that after your estrogen levels decrease, it's all going to fall out anyways.

But Havetskya has some other tips. "You might get some thin patches near the crown or around the ear. Rarely does it happen on top. Don't pull your hair back too tightly, it will encourage your hair to fall out more quickly, and never ever bleach your hair during or after pregnancy. It's too rough on the delicate follicles."

If your hair is giving you fits, find a good stylist and approach it methodically. It's a long process sometimes, this I know, but a good stylist is worth their weight in gold. So does pregnancy change your hair? Very much, but who knows, you might like the shift.