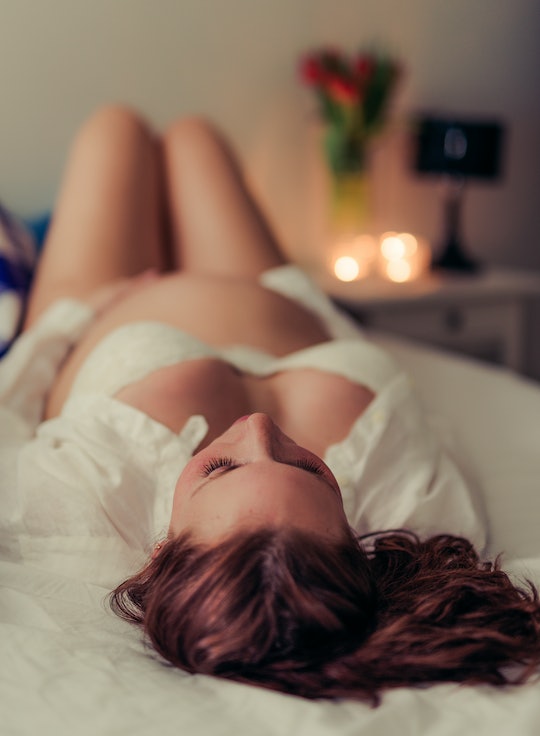 Here's What Sex Is Like In The Third Trimester

When you're in your third trimester, it can feel as though you're walking around with an extra large alien somewhere in the region below your neck to between your thighs. But you still want your partner, so you worry — does pregnancy sex hurt in the third trimester? It's a pretty nerve-wracking part of your pregnancy as you wind down to delivery.

More Like This
Dreaming Of Fish? What They Mean If You’re Pregnant — Or Trying To Be
20 Sweet Ways To Announce Your Pregnancy On Father's Day
Is The Covid Vaccine Safe For Pregnant People?
The Best Pampering Self-Care Products For Pregnancy

According to the website for Dr. Sears, the hormonal changes that prepare you for giving birth by increasing blood flow to your vagina and changing the very nature of it, are the same changes that can make you less-inclined toward the idea of sex because it affects the way sex feels for you and your partner. But honestly, these changes, like a feeling of fullness or increased lubrication, are as likely to heighten pleasure as they are to detract from it.

During the later parts of your pregnancy, Dr. Sears' website noted that there are so many capillaries at the surface of the vagina, and just at the vaginal opening, that the friction produced by traditional vaginal intercourse may lead to light bleeding and tearing. While this generally isn't a big deal, it's important to talk with your healthcare provider if you notice this happening.

(This happened to me, and I went to the ER before calling my OB-GYN. That was the longest time I ever spent in the hospital, even if it was just a few hours, because I had to describe having sex with my husband over and over and over again. I should've just recorded it for playback. Seriously. Call your OB-GYN, unless you like telling a group of med students doing rounds about how fond of doggy style you are because your belly is enormous.)

The March of Dimes Association noted that if sex during pregnancy is painful for any reason — beyond the light cramping caused by orgasm — call your provider. While it may be no more than sensitivity caused by the aforementioned increased blood flow, it could signal something more concerning, and should be evaluated. Does pregnancy sex hurt in the third trimester? In short: it shouldn't, according to the Mayo Clinic, but it could be uncomfortable given your bump and fatigue.

Remember, sex is meant to be fun and enjoyable. If you aren't enjoying it, don't do it. There are plenty of other ways to be intimate with your partner that aren't intercourse, and you might find them "O" so much more pleasurable in your current condition.