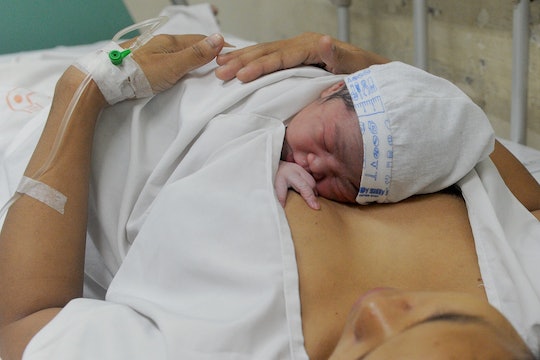 After an interesting new study was released from a university in Switzerland last week, moms around the world are asking a question that previously had a more obvious answer: Does pregnancy stress make your baby more resilient? Past studies had found that pregnancy stress is linked to a panoply of behavioral and developmental problems, but this new study suggests there might actually be a benefit to maternal stress. While news outlets are reporting that the study shows pregnancy stress makes babies more "resilient," it turns out that the results aren't quite so clear.

The study was conducted between 2007 and 2010 by psychologists at the University of Basel in Switzerland, with the results being published last week in Social Cognitive and Affective Neuroscience. The psychologists tested 100 pregnant moms-to-be for cortisol levels (cortisol is often affectionately referred to as "the stress hormone"), and also administered questionnaires that assessed the mom's prenatal and postnatal mental health. The researchers then assessed umbilical cord blood from 39 of the newborns, and found an inverse relationship between maternal stress and OXTR DNA methylation in the umbilical cord blood: moms with more stress had reduced methylation.

For those of us who aren't sure what reduced OXTR DNA methylation is (that's everyone, right?), here's how they described the results at the University of Basel's website:

Whether a gene can be activated or not also depends on methyl groups that attach to the DNA and function as a switch. The researchers found that children from mothers with increased stress and depressive symptoms show a reduced methylation of the oxytocin receptor gene at birth. This results in the gene becoming more easily activated, which leads to a facilitated production of oxytocin receptors for oxytocin to react with and unfold its effects. Oxytocin not only has an important function in mother-child bonding and in induction of labor and lactation, it also influences social behavior.

In other words, it appears that at the time of birth, babies born to moms with more stress might be able to produce oxytocin more easily, or with fewer environmental cues. The process that creates oxytocin receptors, at any rate, is more sensitive to being activated. Since oxytocin, among other things, is a soothing, anti-stress hormone, this might imply that these babies will be more resilient to stressful life events.

The small sample size of the study, though, is limiting, and the actual long-term implications of reduced OXTR DNA methylation at birth are unclear. It's certainly not enough evidence to conclude that stress during pregnancy is good for a baby, or that babies born to stressed-out moms are more "resilient." And since the umbilical cord blood is only a brief snapshot in time, the University of Basel's website specifies that "no conclusions were drawn with regard to the long-term consequences that the epigenetic programming of oxytocin receptors might have for the children."

The study's authors wrote in the abstract that "if a reduced OXTR methylation increases OXTR expression, [the] findings could suggest an epigenetic adaptation to an adverse early environment." It's important here to note the "if" and the "could." It's unclear whether reduced methylation has any long-term effects—but if it does, this could tell us something useful about the effects of maternal stress.

The research team was led by Prof. Gunther Meinlschmidt, who explained that the purpose of the study was to secure some initial findings about the possible positive effects of maternal stress. "Resilience research in this area is only at the beginning," Meinlschmidt said in a press release. "The observations made provide first evidence that an adverse environment during pregnancy could also activate protective mechanisms."

Despite the limited reach of the study, it's certainly hopeful news. It's not exactly easy to stay stress-free while pregnant, and yet dozens of past studies have pointed to the negative outcomes of maternal stress. For example, higher maternal cortisol levels have been linked to lower childhood IQ, behavioral disorders, and lower birth weight.

That seems scary, but happily, the magnitude of the effects of maternal stress tend to be pretty small—plus, in these studies, scientists were specifically looking for the negative consequences of maternal stress. It's great to know that scientists are now sniffing out the positive consequences, too. Who knows? This might even give pregnant ladies one less thing to be stressed about.

More Like This
Is It Safe To Keep Using Period & Fertility Apps In A Post-Roe America?
Barre Could Be The Low-Impact Prenatal Workout You Need
Keep Talking To Your Kids About Abortion — It's More Important Than Ever
Can You Do Zumba While Pregnant? Experts Weigh In