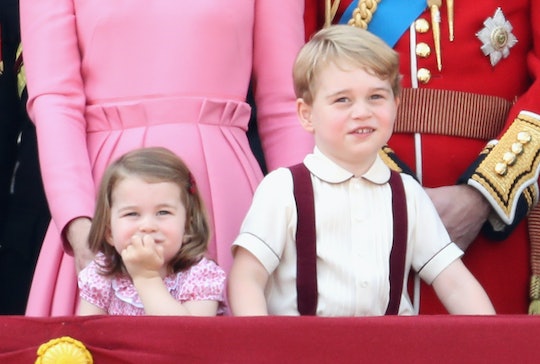 Does Prince George Outrank His Own Mother In The Royal Family?

Tracing lines of succession in a royal family can be tricky -- especially when that family seems to be growing pretty rapidly. With Prince Harry's recent marriage to Meghan Markle and the addition of Prince William's and Kate Middleton's new son to the royal family, people are beginning to wonder how it all adds up. Attention has turned onto Prince William and Middleton's oldest child as people wonder: does Prince George outrank his mother?

Kate Middleton married into the royal family, officially known as the House of Windsor, in April 2011. Her husband, Prince William, is currently second in line to the throne behind his father, Prince Charles, according to The Week UK.

And the Duchess of Cambridge? Well, she's not actually eligible to head up the throne at all. As The Week reports, if something happened where Prince William either passed away while king or abdicated (gave up, essentially) his right to the throne, she would be passed over in favor of her son.

Now, some people might bristle at the implications of this, seeing it as a case of men favoring women. While the royal family has struggled with this, ending with the 2013 Succession to the Crown Act that determined birth order instead of gender as the deciding factor, Middleton was never up for the throne. And not because of her gender, but because she's not actually from the House of Windsor.

In order to understand a little better how the line of succession works, it helps to look at more real life cases, and there's no one better to examine than the Queen herself.

Many people tend to go off traditional assumptions that place the king as the face of a country but, if that's the case, then what happened with the King of England?

Queen Elizabeth II currently bears the monarch's crown and she's actually the longest reigning monarch in history, according to Time. The Queen has reigned for 64 years since her father's death in February of 1952, as noted by the BBC. Since there's no mention of a current king, some might assume that the Queen is a widow, but no. Her husband, Prince Philip, is very much alive and, as you might notice, not a king himself.

That's because, essentially, Prince Philip wasn't a direct descendant to the throne. And actually, he didn't earn the title "Prince" until the Queen gave it to him a decade after their marriage, according to Town & Country. Traditionally, there is a ceremonial queen title that can be given to wives of British monarchs. However, the same does not occur in the reverse; there is no honorary king title.

Looking at the case of the Queen and Prince Philip, it shows how the line of succession doesn't broadly apply to anyone who has married into the royal family. Instead, one has to be born into it.

Kate Middleton can earn the ceremonial queen title and be known as Queen Catherine after her husband ascends to the throne, but it's just that: ceremonial. It will have no real affect on her status and Prince George would still reign if anything happened to his father.

However, as noted earlier, the 2013 Succession to the Crown act has meant a slight change from Middleton's children. Before the act, the birth of Prince Louis would have meant that Princess Charlotte would become fifth in line to the throne. But, because of the act, Princess Charlotte was able to maintain her spot as fourth in line.

Now, this has no real bearing on home life. Prince George may outrank his mother for the throne, but she's still mom at the end of the day and she'll always have that influence over him. So, maybe one day in the future, the public can look forward to seeing some nice moments between the king and his mother.