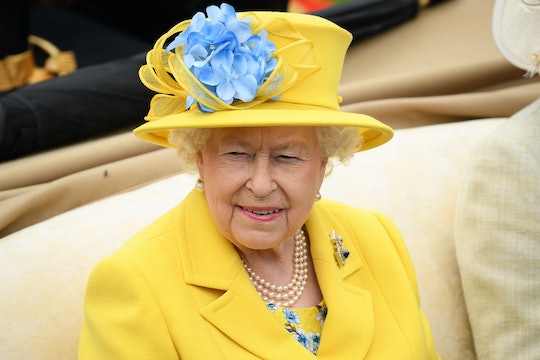 Does Queen Elizabeth Support Same-Sex Marriage? Here's What We Know

This has been a year for historic royal weddings. After Prince Harry and Meghan Markle tied the knot last month introducing one of the first mixed race royals into the family, the world waits yet again with bated breath for Queen Elizabeth's cousin, Lord Mountbatten, to marry in what will be the family's first LGBTQ nuptials. Thanks to the news, many people are wondering whether Queen Elizabeth supports same-sex marriage. There have been a lot of conflicting rumors over the years that stand to be cleared up.

Queen Elizabeth has said that she supports everyone, including those in the LGBTQ+ community. Town and Country reported last June that in her State Opening of Parliament speech, she shared: "My government will make further progress to tackle the gender pay gap and discrimination against people on the basis of their race, faith, gender, disability, or sexual orientation."

This comes after a 2013 report by The Daily Mail alleging that, while the Queen was always in favor of civil partnerships, she had allegedly said she didn't support same-sex marriage on account of her Christian religion. However, the comments were never verified. The Daily Beast reported in 2016 that senior officials at Buckingham Palace denied the claims, and reiterated that the Queen did in fact support same-sex marriage.

Contrary to the false claims, LGBTQ rights have actually seen a lot of progress during the Queen's reign. The Guardian reported that in 1967, private homosexual acts between men over the age of 21 were officially decriminalized. (It is worth noting that between 1967 and 2003, 30,000 gay and bisexual men were still convicted for homosexual behavior, The Guardian reported, despite the ruling having passed.)

In 2013, the Queen signed the Royal Assent for gay marriage, which not only legalized it, but also gave it the royal seal of approval, The Independent reported. Pink News reported after-the-fact that comedian Stephen Fry recalled hearing the Queen express that she was happy about the legislation the day it was signed:

When the queen signed the Royal Assent for the Equal Marriages Act, allowing gay people to marry for the first time, she put it down and said ‘Well, who’d have thought 62 years ago when I came to the throne, I’d be signing something like this? Isn’t it wonderful?'

Five years later, another historic day is set to occur, as News.com.au reported that the Queen's cousin, Lord Mountbatten, will marry his partner James Coyle. CBS reported that the wedding will take place in Devon England, with a small ceremony and later a reception for 120 guests. Lord Mountbatten previously told The Daily Mail that while he and James have decided to keep their wedding day intimate, his family sends their well wishes. "Sadly they can't come to the wedding. Their diaries are arranged months in advance and they're not around, but they adore James," he said. "Everyone adores him."

Pink News reported that the Lord's ex-wife, Lady Penny Mountbatten, will actually be the one to walk him down the aisle, in what is yet another groundbreaking moment for the royals. In the same interview, the Lord talked about how he explored and discovered his sexuality. "Penny accepted me for who I was, so perhaps I relaxed and felt I could explore that part of me as our marriage matured," he said. "Maybe what happened is, with me being so open, I'd mention it to Penny and that would make her upset."

Though his and James' wedding day is still not public, whenever it does happen, the world can rest assured that the Queen will send her well wishes and unconditional support.